When I first started to review Rockchip RK3288 based TV boxes I noticed several had critical issues with Ethernet including Nagrace HPH NT-V6 and Kingnovel K-R6. The main cons of the Nagrace media player included:

Since then SPMC and Kodi must have improved video playback issues, but as late as last month I still got feedback from one person (Mr. B.) complaining about Ethernet on HPH NT-V6, but he finally got an email with a new firmware that is said to fix the Ethernet issues and more:

Below is the new firmware you can download and update the device.

1. Add Lehome assistant, use your mobile phone control the box, download the apk by setting/lehome

Here is how to update. Below information for updating a box with new firmware for your ref.

You can try the TF card/U disk upgrade as well, method as below,

So I downloaded that firmware, which was a breeze since the file is hosted on mega, extracted it, and found the “full_package.zip” files as advertised in OTA_TRN6A_HPH-FO-N6_RK3288_4.4.2_EN_US_FT0_V1.4.4_150129/V1.4.4 directory, and copied it to a micro SD card formatted with FAT
32, renamed the file to “update.zip”, and inserted it in to the device, and after a few seconds I got a pop-up windows asking me if I wanted to upgrade the firmware.

I clicked on Install, then the system checked the firmware, rebooted, and installed it successfully. The firmware in my device was still v1.1.9, and there was no problem updating to the latest v1.4.4 version, so you can probably give a pass to the annoying AndroidTool Windows utility.  You can also check the full changelog for the firmware since November 2014. The Ethernet problem was fixed on the 16th of January:

So if you still have Ethernet serious issues with another Rockchip RK3288 box, it may pay to find a newer firmware. I’ve doubled checked the fix, with iperf app, and the command line: iperf -t 60 -c 192.168.0.104 -d, and sure enough the improvement is there, and Ethernet is now usable in full-duplex, as you can see the difference for the red bar between firmware 1.1.9 and 1.4.4.

I’ve also quickly checked LeHome smartphone app, which you could download via a QR Code in the Android settings, or this link. After you install the apk (LeHomeRemoteControlClient_v1.5.apk), and run it, the app should look for a device. In my case it detected “T-Chip Tchip-DMR 001”, which I selected.

There’s also a gamepad mode which can be useful for games. 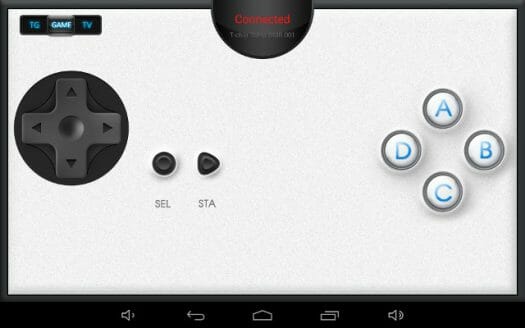 I have not tried the gamepad, but the touchpad, keypad, and Android keyboard input all work fairly well, albeit you may have to switch between input methods a bit too often.

Is it just me or does HPH have the BEST support out of all these China manufactured boxes? If they keep it up not only are they going to get my business, but I suspect everybody else’s as well.

@Rayzin I think HPH is part of the model name, and he company that does it is Nagrace, in collaboration with T-chip. Ugoos is also one of their customer. As for firmware, they seem to have many updates based on the version number, but unfortunately, they don’t make them easy to find. E.g. there’s nothing on Nagrace NT-V6 download page: http://www.nagrace.com/en/download/index/name/NT-V6.html I was only lucky to find that firmware, because somebody forwarded the email to me. Also bear in mind that it took 8 months to fix a rather critical Ethernet issue. AFAIK they don’t have support forums either, maybe… Read more »

They provide support on freaktab forum and also have a Baidu page where you can download all their firmware updates., listed on freaktab.com.
They are very quick to respond to issues and provide fixes and support.
One of the few companies that go the extra mile.

Just a pity that they also don’t manufacture tablets and smartphones.

Dear mo123. Where can i find the ios/Android remote control app? I googled no lucky. In my NT-N8 no reference to Lehome remote controlapp. No idea where to look at. Thank you

@mo123
OK, now I can see some activity in Freaktab. Google search did not yield much with regards to firmware updates.
They may be releasing firmware, but it’s hard to find, and OTA is not working.