The firmware update procedure for Rockchip RK3288 is well-known, and Ugoos even includes a word file with flashing instructions in Microsoft Windows with the firmware images. However, it still took me about one hour to find out how to do with Ugoos UM3, so I thought I’d write a post in case others encounter the same issue.

I flash the firmware in Ubuntu, so instead of using Android Tool, I flashed it with upgrade_tool command line utility I got from Orion R28 SDK, but you can also download Linux_Upgrade_Tool_v1.2.tar.gz directly.

First let’s enter recovery mode. The procedure is the same as for any device, and you have to press the recovery button (“reset” pinhole in UM3), insert a USB cable between your PC and the OTG port of your device, wait a couple of seconds and release the recovery button. 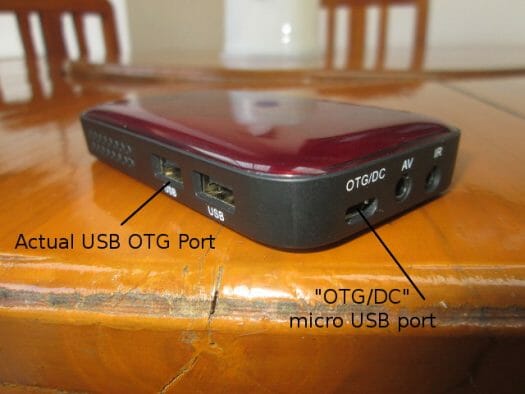 The thing that wasted so much time was the marking on the device. First I naively used the “OTG/DC” micro USB port, but I did not get anything in the kernel log (dmesg), and after several tries, and switching between my Linux PC, and a netbook running Windows XP, I decided to investigate further, and found out the actual USB port was the left USB port on the side of the device.

Once I found this little detail out, it worked fine, and I followed the same flashing instructions I used with Tronsmart Orion R28.

If you get the message “Creating Comm Object failed!”  while using upgrade_tool, change the udev rules in Ubuntu as follows:

And now you should be able to complete the firmware upgrade:

After a successful firmware update, which should take about 10 minutes, upgrade_tool output should look like:

That’s all for today, now I’ve got some testing to do…

Interested to see how well it handles flash video.