There’s a fair amount of low cost boards powered by Xilinx Zynq Z-7010 and Z-7020 with dual core Cortex A9 processor and Artix-7 FPGA, but those who wanted to have PCIe ports or high speed transceivers had to go with the higher-end Xilinx Z-7030/7040/7050 with Kintex-7 FPGA fabric for a much higher cost. But Xilinx introduced Zynq Z-7015 late last year, a low cost Artix-7 FPGA + Cortex A9 SoC that also adds four 6.25Gbps SerDes ports and one PCIe Gen2 x4 integrated block. At least two modules based on the new SoC are currently available with DAVE Embedded Systems’ BORA Xpress  and Trenz Electronic TE0715 Series. 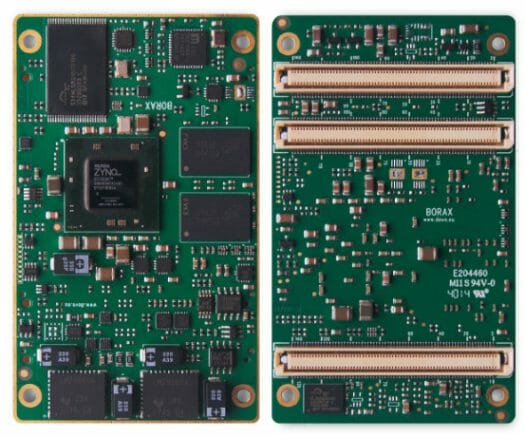 The company provide a U-Boot and Linux 3.x.x BSP for the board. A development kit (BORA Xpress devkit) is said to be available with one SoM, one carrier board and all accessories required for immediate startup, but no details are currently provided for the kit on DAVE’s BORA Xpress page. More documentation should eventually be uploaded the site, and I could not find any pricing nor availability information.

The company claims the “latest documentation, design support files, reference design with source files and tools” are available on the Wiki, but for now at least, this looks very much like a work in progress. I can only see they recommend Vivaldo Webpack for development.