ZX Tek‘s XBAND is a board about half the size of a micro SD that comes with a Bluetooth LE radio and a 6-axis MPU6500 motion sensor that can be integrated into wearables and IoT applications such as a remote controlled robot with a camera., a wireless smart light-bulb, and iBeacon device and so on. 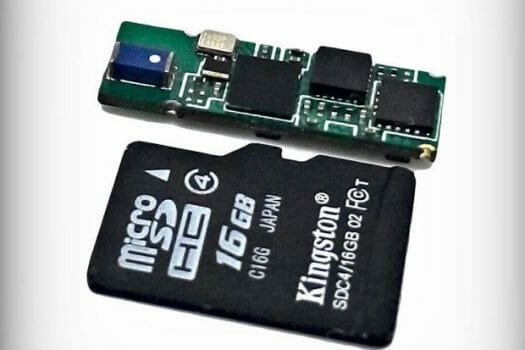 Development for the Nordic version can be done with XBAND nRF51822 library for Arduino IDE, mbed online IDE, and Nordic BLE SDK for Keil and GCC, while you’d need to use PSoC Creator 3.1 for the Cypress version.

The company is now looking to raise $5,000 or more via a flexible funding Indiegogo campaign (that seriously lacks details). A $10 “early bird” pledge will get you a XBAND (probably with Nordic, but it could be Cypress too.. just try your luck…), but it might be an issue to power it. I actually don’t know since no details have been provided about that. A better reward might be the $15 XBAND maker edition with an XBAND mounted on an Arduino shield, so that you can simply connect it to an Arduino board. Other rewards are available with different quantities. Shipping appears to be included and delivery is scheduled for June 2015.

The company also uploaded a video with a TRON like wearable band using the Nordic module.

If you’re looking for Cypress I hear there will be a small module (inc antenna, xtals..) from them out soon costing ~ $5 (FCC/CE approved) Then you can just add whatever sensors you want. To be honest the MPU-6500 is getting a little long in the tooth, there’s better choices out there.

Plus it is a multiprotocol radio. Change the firmware and it becomes Zigbee or 6lowpan.

The Firefly team has released their BLE platform too. It’s only $19.9
http://en.t-firefly.com/en/firesmart/fireble/

@Dv
It’s a bit bigger, but interesting too.