I’ve been owning an Acer Aspire One D255E netbook with a 10″ display, an Intel Atom N455 processor and 1GB RAM that served me well during my travels, but as I’ve become older and less patient, I felt I needed to upgrade it. I planned to spend around 10,000 Baht (~$300), wanted a 14″ display, one of the low power CPU such as Intel Bay Trail-M or AMD Mullins / Beema processors, at least 500GB storage, 4GB RAM, and the ability to install Ubuntu. Finally, after going through several products at my local shop, I had to chose between Acer Aspire E5-411-P3CL with a 7.5W TDP Intel Atom N3540 and Acer Aspire E5-421G-45L0 with a 15W TDP AMD A4-6210 processor that both sell for 11,900 Baht ($365). Despite my preference for processor with lower TDP, I still went with the AMD system, since the performance is a little better, the warranty is good for 2-years (vs. 1 year for the Intel laptop), and I’ve always rooted for AMD in the past as an alternative to Intel.

Both laptop are pre-loaded with Linpus Linux 9.2, but when I boot the laptop at the shop, I discovered it was just a headless version that boots to the command line. The seller even told me something like “oohhh, Linux is like that? I did not know, normally just just format the hard drive…” So it’s like FreeDOS it’s installed to test hardware during MP, and let the shop sell legal system so that customers can install Windows themselves. Sometimes you also get given a free coupon to get it installed in a small shop. 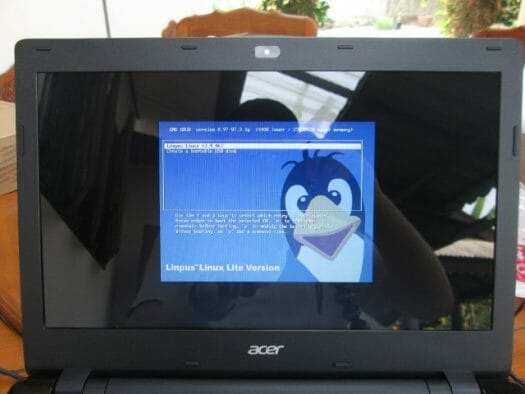 Nevertheless, I finally purchased the laptop and planed to install Ubuntu on the system.

Since I had already downloaded Ubuntu 14.04 64-bit ISO, that’s the one I installed, but once Ubuntu 15.04 is released, you would probably avoid several of the issue I had during installation. You are likely to face issues with Ubuntu 14.10 too.

I followed the standard installation procedure, by “flashing” ubuntu-14.04-desktop-amd64.iso to a USB flash drive formatted with FAT32 using Unetbootin software in another Ubuntu machine, but you could also use a Windows machine with Rufus.

Then I inserted the USB flash into the Aspire E5 laptop, press F2 at boot time to enter InsydeH20 Setup Utility, and select the USB drive as primary boot device, and Ubuntu setup started normally, but the touchpad did not work, so you’ll have to connect a USB mouse unless you’re comfortable with using the keyboard for everything. The touchpad probblem is a known issues, that’s fixed in Linux 3.17 or greater+. 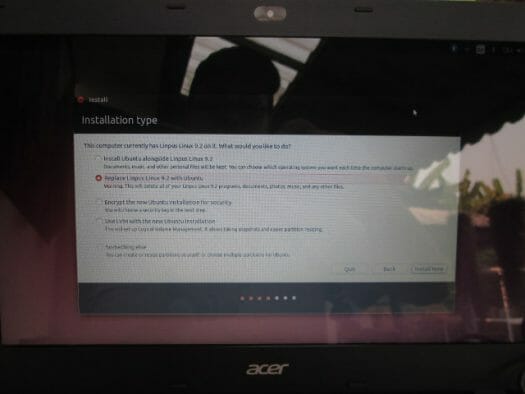 Apart from this issue the installation went smoothly, and I selected “Replace Linpus Linux 9.2 with Ubuntu” option. The laptop is usually with Ubuntu 14.04 as it is as long you don’t use the not-so-convenient-anyway touchpad, don’t need to use the HDMI and VGA port, and accept some slow animation from time to time.

The latter appears to be due to AMD/ATI open source graphics drivers, so I went to “Additional Drivers” and clicked on “Using Video driver for the AMD graphics accelerators from fglrx-updates (proprietary)”, and after installation the system appeared o run a bit smoother. 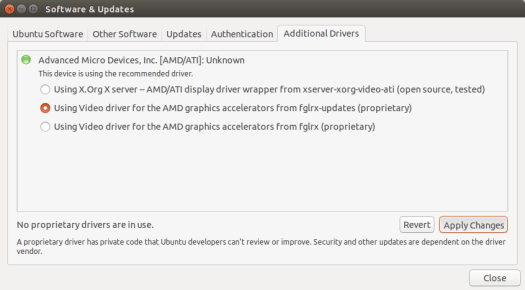 Albeit an extra /dev/sda3 partition appeared to have been created for swap, it was not mounted in Ubuntu, so I installed and ran Gparted to check it out, and formatted the partition to linux-swap there. And completely by modifying /etc/fstab with the line:

Since it’s not always convenient to connect a USB mouse to the laptop, I also decided to upgrade the kernel, as I explained in my “build a kernel module in Ubuntu” post. I started with Linux kernel 3.19.2, as it was the latest stable kernel at the time, but unfortunately Unity would not start anymore. So I booted again to Linux 3.13.xx installed by default in Ubuntu 14.04 and changed the graphics drivers back to the open source one, and that did the trick, with the touchpad working, but the display seemed to be using the wrong resolution, and although HDMI output worked the lower part was garbled. 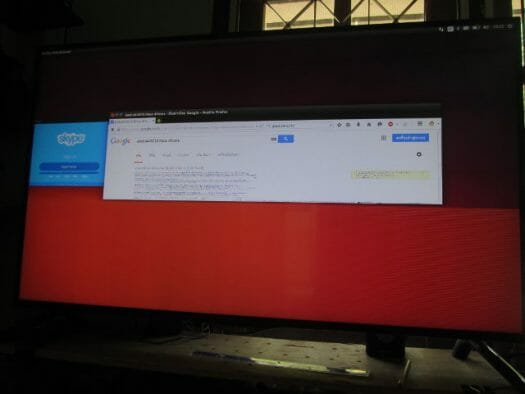 So instead I installed graphics drivers downloaded directly from AMD website, and Unity would not run with either Linux versions installed.

Finally I found that Linux 3.18.9 with fglrx-updates graphics drivers work best for me. That’s how I installed that version of Linux.

However, there are still some known issues:

If you plan to use AMD-V virtualization extension, for example for 64-bit OS in Virtualbox, you’ll need to hack UEFI settings since the option to enable it is not available by default.  Anyway, I’ve now come to a point where Ubuntu 14.04 is perfectly usable on Acer Aspire E5, although I would not have complained if the whole installation process would have been easier…

I was enable to access Unity this morning, and it just booted to the terminal.
So since I was in Ubuntu 14.04.3, I used LTS hardware enablement stack to get the latest kernel and updates (https://wiki.ubuntu.com/Kernel/LTSEnablementStack), and it fixed my issue with Unity:

Before completing the update again.