Last time I tried running benchmarks in an Allwinner A80 board (A80 OptimusBoard), it either rebooted during the benchmark, or had fairly disappointing results for example for USB storage. I documented my findings in a post entitled “Current Performance and Stability Issues on AllWinner A80 OptimusBoard Development Board” which was written in October 2014. But a few months have passed, and since Cubieboard4 is another hardware platform, so I was interested in running benchmarks including storage and networking performance testing on the new board to see if any progress was made.

Manufacturers can add the key ro.sys.hiritsu to build.prop in order to artificially inflate their Antutu scores with Allwinner A80 processor. So before running Antutu, I checked /system/build.prop in the firmware, and found out no trace of this variable, which can only be good for CubieTech reputation. 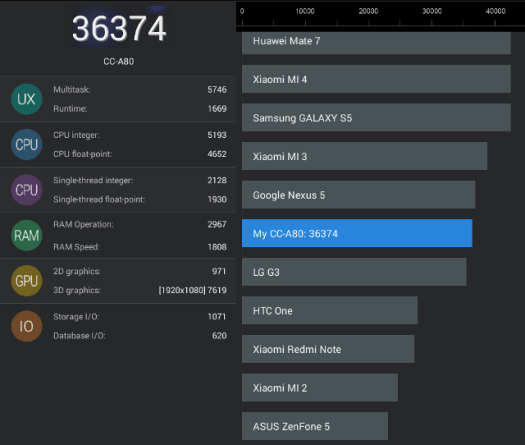 CC-A80 board, the other name for Cubieboard4, got 36,374 point in Antutu 5.6.2, which is similar to what Allwinner A80 cheating hardware platforms get with Antutu X, a version of Antutu that prevents cheating. So that means performance is as expected here. 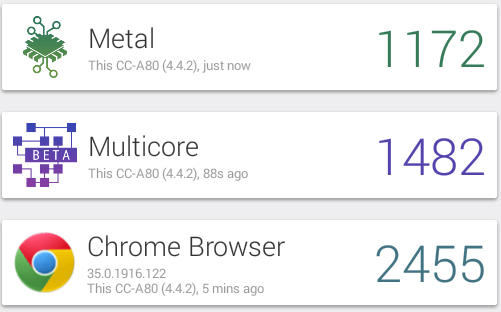 The board gets 1172 points for Metal, 1482 points for Multicore, and 2455 points for Chrome Browser tests which compared to respectively 1138, 1352, and 2109 (Stock Browser) for Tronsmart Draco AW80 Meta, an Android media player also based to Allwinner A80. 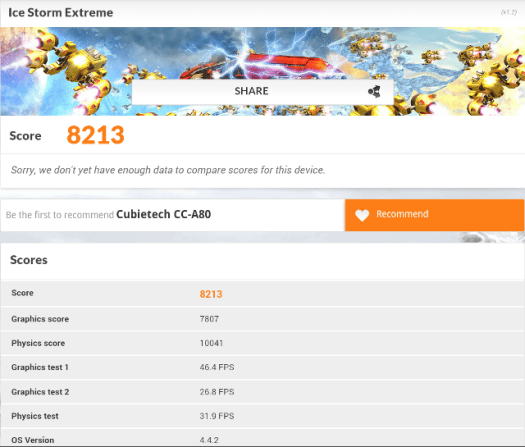 3DMark’s Ice Storm Extreme score is more interesting, as the board gets 8,213 points against only about 6,500 for Tronsmart Draco AW80, and 7,000 to 7,500 points for Rockchip RK3288, so there may have been some GPU drivers optimization since then, or they simply clocked the GPU at higher speed.

We already knew the eMMC – with advertised 25MB/s read and write speed – would not break records, but at least its A1 SD benchmark reports speeds so no far off from the advertised rates at around 19.50 MB/s in both directions, placing the board in the middle of the pack, with very good write speed, but below than average read speed.

Cubieboard4 features an USB 3.0 OTG port and an OTG adapter which allowed me to connect my Seagate USB 3.0 hard drive to the board. Unfortunately, the drive could not be powered via this port, albeit a USB 2.0 flash drive worked just fine. So I had to fallback to connecting my HDD to one of the USB 2.0 ports. I was interested in checking NTFS performance since it was poor on A80 OptimusBoard, but unfortunately, CC-A80 firmware would only mount EXT-4 and exFAT partitions of the drive.

A1 SD reports 21.63 MB/s read speed and 18.17 MB/s write speed for the EXT-4 partition slightly outperforming the underwhelming performance of Draco AW80 media player. What about exFAT? Write is 3.16MB/s, and read a massive 239.04MB/s? The latter is clearly impossible over USB 2.0, and happened because of the slow write speed resulting in a ~400MB test files that was cached and read from the RAM, so I did not include this results in the chart. So USB storage does not look promising on the board at least for now.

Gigabit Ethernet performance measured with iperf Android app and the following command line iperf -t 60 -c 192.168.0.104 -d, showed the same asymmetric transfer rates over Ethernet as Draco AW80 with one side getting 712 Mbits/sec and the other 216 Mbits/sec.

I’m not using iperf for Wi-Fi to make use of my older data, and because Wi-Fi is normally slow enough not to be impacted by internal storage performance, and instead transfer a 278MB file over SAMBA via ES File Explorer. I’ve tested both 5.0 GHz (802.1n) with TP-link TL-WDR7500 router and 2.4 Ghz with my older TP-Link TL-WR940N.

Wi-Fi performance is quite below average, and I was a bit surprised to see 5.0GHz to be faster than 2.4GHz Wi-Fi, as in my environment there are only these two routers. Maybe the newer router simply have better performance.

In conclusion, Allwinner A80 is a powerful processor, and in tasks where you need raw CPU or GPU power it should deliver, but USB 3.0 is just not working at least with my hard drive, read and write speed over USB 2.0 appears weak, and both wired and wireless performance are somewhat underwhelming. Some of these issues have been known for over 6 months on Allwinner A80 platforms, so I’m not sure there are some silicon issues, or it just takes an awful lot of time to improve the firmware.

Slower than Odroid Xu3-lite but price is acceptable