Yesterday, as I wrote a Linux 4.0 Changelog, I noticed a new ARM processor called AlphaScale ASM9260, and I thought it might be interesting to find out more. A Google search would only return results from the Linux kernel mailing list and mirrors, so I checked out the code a bit to find out its an ARM9 processor made by AlphaScale Integrated Circuits Systems, Inc, based in Wuxi, China. The company website alphascale.com does not work, but I found out the processor is sold on Taobao for 38 RMB (~$6), and there’s also a development board (ASM9260DVK) for 498 RMB or about $80, and that’s basically the only two links were I could find any details. 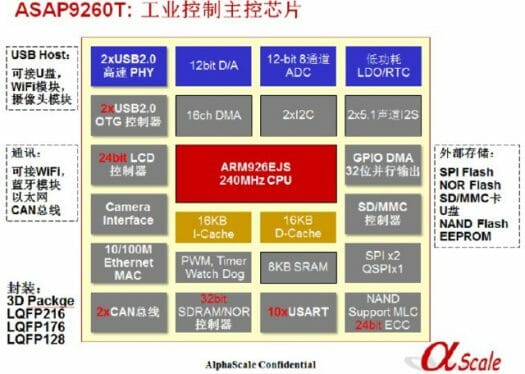 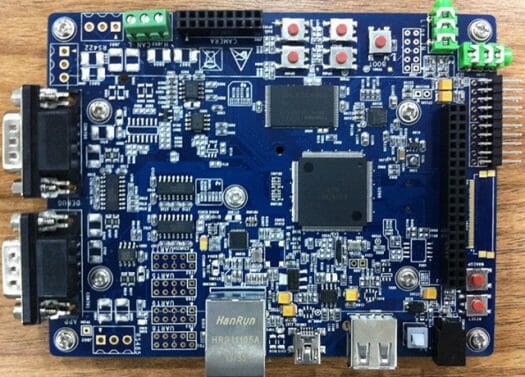 The development board  comes with a 10/100M Ethernet interface (KSZ8051RNL Ethernet PHY), micro and full size USB ports, two UART ports (DB9) for debugging and app?, a CAN port, a camera interface and two audio jacks (WM8731L Audio Codec). It can also support 4.5″, 7″ or 8″ displays, and boot from SPI NOR and NAND. There’s also a 20-pin JTAG interface., and a few unpopulated UART and RS422 headers.

The software development kit description refers to ALPOS ADS1.2 development environment, but I can’t find any details about it, as well as support for Linux 2.6.38, U-boot and GCC cross-toolchain. It might not be exactly using the latest version of Linux, but since the developer who submitted patchsets for ASM9260 has been working on it since August 2014, some company must be serious about improving Linux support for the platform.

The company claims ASM9260 offers a more cost effective solution compared to Samsung S3C2440 and Atmel SAM9G45, partially because it can be used on 2-layer boards, while the competitors require 6-layer boards.

Very exciting, although they don’t have website but why they could buy ARM9 lisence from ARM ?

They have website, it is just down
see http://www.cebit.de/exhibitor/alphascale-integrated-circuits-systems/U498714
==> http://www.alphascale.com/

http://tianjili.com/product.aspx?cid=385 is the domain that is on the image of taobao
the linux committer ( Oleksij Rempel ) was working at Tianjili

I have to clear that. We are not belong to tianjili or alphascale. We hack on this soc for hobbit.
We also designed a low cost board for this soc. we called it Chunroll.
20$ for now. I’m happy to hear you from all over the world.
My Skype is duhuanpeng.
Or search chunroll on taobao.com

But I don’t find much details on your github account, or anywhere else.

Source code are store in my personal git account. I think it’s mess just now. u-boot & barebox support mostly by me, the linux kernel is by Oleksij Rempel, also I did some work. I also start a T-Kernel port. https://github.com/zhang3/tkernel_source there are also some script for building t-kernel I think if somebody can join us and make t-kernel with kbuild support, will be perfect. u-boot 2014.10: https://bitbucket.org/alphascale/u-boot/wiki/Home barebox bootloader: https://github.com/zhang3/barebox/tree/as92-init linux kernel: https://github.com/olerem/linux-2.6 or http://www.kernel.org – – – I think my task now is move all resource to github.com/chunrollboard. and, hope there some body can help with chunroll project’s… Read more »