We’ve already have two 96Boards compliant boards formally announced with HiSilicon Hikey and Qualcomm Dragonboard 410c, and Actions Semiconductor was also expected to release theirs soon. Albeit it’s not been officially announced yet, the company has been showcasing their Bubblegum-96 board at the Hong Kong Electronics Fair 2015. 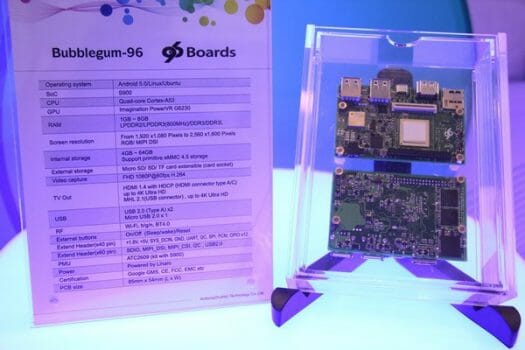 The board can run Android 5.0 or Ubuntu based on Linaro codebase. They did not provide the exact RAM and storage capacity, but since the board needs to be low cost, I’d use they’ll go with 1GB RAM, and 4GB internal storage, just like the Hikey board. There will also be another board called Actduino S900 powered by the same processor, running the same images, but not compliant with 96Boards specifications, and adding an Ethernet port, an LCD connector and so on.

The power barrel is in the 96boards standard location – see the 96boards.org website and you see how both hikey and dragonboard have power jack in the same side as low-speed connector.

I’m getting pretty sick of these shitty 96Boards boards. None of them interest me much. They’re just so limited.
Hopefully the “enterprise edition” boards due out soon will be more interesting.

@Ian Tester I agree that the initial crop of 96boards offerings are limited in their capabilities as stand-alone computers. However the intent of the project was to make higher-end ARM processor development platforms obtainable by engineers and even hobbyists who could not afford to spend several thousand dollars for the enterprise-level software development boards. As such, these boards were intended to be stepping stones to more capable systems rather than being broadly applicable out of the box. Hopefully some enterprising aftermarket developers will provide mezzanine boards with enhanced RAM, storage, and networking capabilities – as well as other extenders for… Read more »

My plan is to do LCD breakouts for 96boards for really cool MIPI displays I own quantity of including this 3.1″ Square display that is IPS, 700 nits and 720 x 720 pixels !
http://store.earthlcd.com/EarthLCD-3-1-720720
Always interested in hearing from consultants looking for work. randy at earthlcd . …

Not done by Linaro, but a member of openSUSE community.