Actions Technology is a subsidiary of Actions Semiconductor SoC vendor, that makes solutions based on Actions Semi SoCs, and recently joined Linaro. The company is said to focus on “focuses on solutions for smart handheld and smart home devices. Its main products are tablet, over-the-Top (“OTT”) set-top boxes and Bluetooth enabled boombox solutions, along with total product and technology solutions based on the Android platform”. We already know it will soon release a 96Boards compliant board, but in the meantime, the company has officially launched Actduino S500 development board powered by a new S500 quad core Cortex A9 processor. 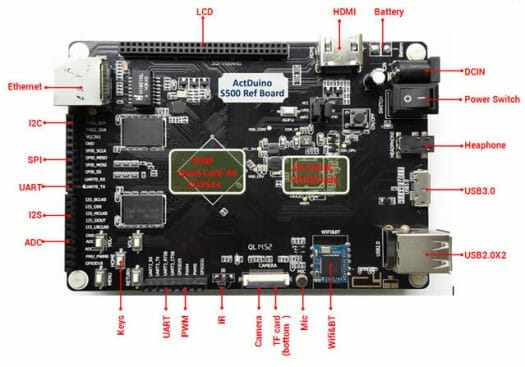 I actually found out about this board on ARMDevices.net last October, and sent an email asking for information to the company, but I have not received an email yet after 6 months… At the time, the processor was called ATM7059, but now it’s S500, and it’s unclear if they just renamed the processor, or there are significant differences between the two. Nevertheless, we now have some more details about the hardware:

The board and SoC are said to support Android 5.0 Lollipop, Ubuntu 12.04, and Linux 3.10. The company claims “hardware reference design schematic and board layout diagram supplemented by abundant tools, documents, and other necessary resources”, but these are nowhere to be found. The board specifications above had to be derived from the pictures and S500 features, since that’s all they listed on ActDuino S500 product page. I’m not quite sure they understand what “open source” means at all, despite using the string “open source” ten times in their press release.

Pricing and availability of ActDuino S500 board have not been revealed.

I’ve never seen a physical power switch on a development board before. Bravo.

I have a leaked (early) SDK of this. Unless something changes (not likely) they aren’t releasing full source code and rely on linking prebuilt binaries. I am so sick of GPL violators. We should either start suing them, or stop supporting them.

Dinosaurs want to keep their sandbox… They can keep it.

Really ? power switch ? Come on , It’s a development board not a refrigerator 🙂 🙂

Power switch? First of all, a jumper would be if necessary much more useful (allowing to connect an external switch). Second, why the hell did you put the switch in that position? At least put it with 90° rotation! Third: the 2 USB ports are higher than the switch, so it becomes even more useless! 🙁