When it first launched, Pipo X7 was a $90 mini PC running Windows 8.1 with Bing tablet version, but Microsoft did not approve since that version is reserved for products with a 7″ screen or smaller, and now Pipo X7 sells for around $120 because it includes a $25 license for Windows 8.1 with Bing NTE (for mini PC). So in their cost saving efforts, Pipo decided to add a cheap 7″ 1024×600 touch screen display to their new Pipo X8 mini PC also powered by Intel Atom Z3736F or Z3735F 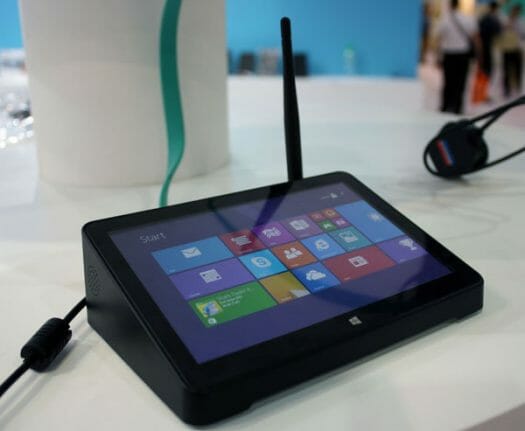 While Pipo X7 costs $120, Pipo X8 is expected to sell for around $100 at launch in May, IMHO provided Microsoft is OK with using the tablet license in that thing… The company also plans to launch Pipo X8s, the dual boot version with Windows 8.1 and Android 4.4.

Having said that, this looks like a neat solution for home stereo use, too. It comes with its own display so if you want, you dont need a tablet/phone to control streaming music (I am thinking of doing something similar with the Cube VI8 that I have laying around).

They should just sell it without that damn Windows … just put Ubuntu on it or something.

This does remind me at the o2 joggler, should indeed be able to run linux and then use it as controller for logitec media server and others. If this is capable of running linux I would consider to buy one.

I see hardly any difference with a tablet any more; there are more usb ports and fixed ethernet.
BTW I also noticed a web site (forgot which one) offering slight discounts on X7

i was under the impression that 8.1 with BING was free so wheres the $25 license come in to it “, also is the win8.1 with bing really a full OS or the shady Windows 8.1 with Bing single language “Chinese version” as found on the likes of the http://www.geekbuying.com/item/Onda-V116w-3G-Tablet-PC-11-6-inch-Dual-OS-Win8-1-Android4-4-Quad-Core-IPS-2GB-64GB-Tablet-Black-341593.html that you cant change without buying again another licence ,in this case an 8.1 pro upgrade licence

I tested MeLe PCG03 with Windows 8.1 with Bing NTE, and I had access to around 16 languages. I understand it’s a full OS, but manufacturers have to leave bing as the default search engine.

Looks like Eny Technology may be making this. They sent me materials with the same unbranded hardware.

@Jean-Luc Aufranc (CNXSoft) Thanks for the pointer to the X9. Since one seller offers shipping for the X8 from a local warehouse, the total price difference after shipping and import tax between the X8 from the local warehouse and the X9 from China would almost amount to 40 EUR. Now I wonder, if it’s worth the extra cost, since current X8 listings all mention a 1280×800 pixels screen for the X8, which would appear to be good enough, while your article says, the X8’s screen has only 1024×600 pixels resolution. Do you know, if that has actually silently been upgraded… Read more »

I would like to know how to boot from a USB drive in this computer. I’ve enter BIOS but I can’t boot from an USB or make boot menu appear.