ODROID-C1 board has been relatively popular thanks to its great hardware features and good software support for its $35 price tag. In mid-June however, ODROID-C1 got out of stock due to sudden large orders, and it was only scheduled to sale again in early August because of long leadtime for some components. It turns out ODROID-C1 may never sell again, simply because it will be replaced by ODROID-C1+ with various improvements.

It’s still very much based on ODROID-C1 with Amlogic S805 processor, 1GB RAM, and an eMMC sockets, but Hardkernel made the following improvements: 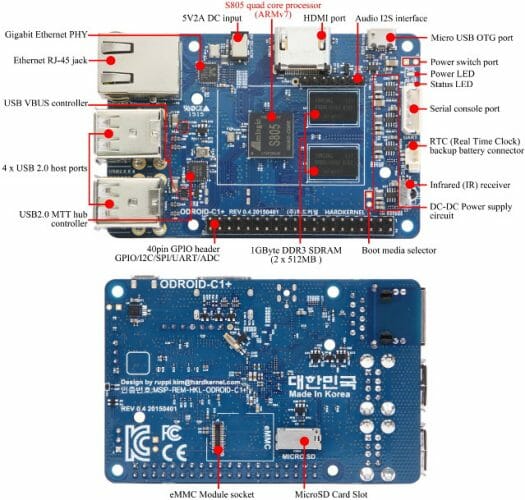 All of which are welcomed modifications. The board size will remain the same, and the large heatsink will be included by default, which partially explains a small downside: the price is slated to increase from $35 to $37 or $38. ODROID-C1+ development board will be launched in August.

I knew I had to wait a little bit before buying.
Does this one fit in RPI cases?
If I use the micro usb for power input with my USB power/wifi cable, can I then use the wifi function of the USB cable?

Where can I find a technical drawing of the board and the pin out for the I2S header?

Thank you! Unfortunately there seems to be no info on the C1+ version of the board. Like the position an the pin out of the I2S interface.

Still running the old kernel, with no WiringPi GPIO interrupt support? Thanks, but I learned my lesson with the first C1.

Same deal here, I’m very unhappy with how Hardkernel communicated the variety of flaws in the original C1, leaving customers to dig deeply into the forums and reach their own conclusion. The first board has several electrical problems and the supplied kernel and root filesystem suck in a variety of ways (e.g. their Ubuntu image ships with graphics libraries that don’t match the ABI of the remainder of the system).

The GPIO IRQ on the C1 works well probably.
http://odroid.com/dokuwiki/doku.php?id=en:c1_hardware_irq

wouldn’t it be a good idea to make a comparison between rasp pi 2, lemon pi, orange pi mini and odroid c1+.
What should be in the comparison: price, support/community, used kernel, hardware acceleration & support, speed, power use, compatibility wit rpi, etc..

in fact, the flaws communications were more like a reply to the users complains… we had to insist to get acknowledge.

@David W
I’m looking for one of those boards. Would you recommend Odroid XU4 for $74 rather than C1+?
I need to be able to run Linux headless, no need for graphic etc.