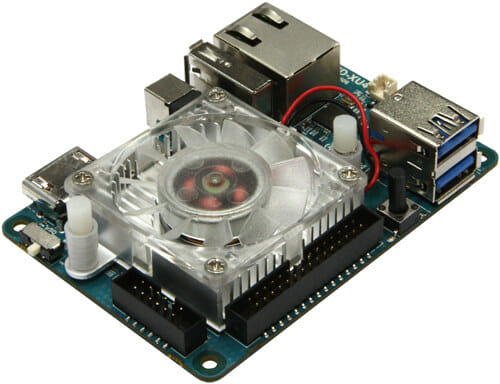 ODROID-XU4 board specifications (differences with ODROID-XU3 highlighted and sometimes in bold):

One of the cool changes is the HDMI type A connector replacing the micro HDMI port found on most other ODROID boards, and which (indirectly) caused issues for several people, including myself. The Ethernet port now supports Gigabit Ethernet, there are two full-size USB 3.0 host ports, a few more I/Os, and the board is smaller. However, a few ports and ICs are gone including USB OTG support, DisplayPort output, the Audio codec (and audio jack), and the power monitoring sensors. The memory is now clocked at 750 MHz instead and 933 MHz in ODROID-XU3 and ODROID-XU3 Lite.

You can check the introduction video for a quick overview of the new board.

ODROID-XU4 is software compatible with ODROID-XU3 so there’s probably not much new here, and the board supports Ubuntu 15.04 (with OpenGL ES + OpenCL support), and Android 4.4 KitKat and 5.0 Lollipop.

I’m pretty sure most people will still be happy with the board despite some of the lost features, as while ODROID-XU3 costs $179, the new ODROID-XU4 sells for only $74 with a 5V/4A power supply, and the heatsink + fan (mounted). If you are interested, you can purchase it via Hardkernel website, or one of their distributors. It’s also cheaper than  ODROID-XU3 Lite ($99) with features the same Exynos processor but clocked at a lower frequency.

Perhaps Samsung does not sell them their gold chips? Otherwise I can’t imagine what would brake them from releasing Exynos 7 board…

Checked shipping outside the US via Ameridroid: $19.95 First Class Mail (untracked, uninsured). Seems a reasonable deal…

@kcg
Maybe they are just working on it, but are not ready to release the board yet.

WoW. I want this and try the http://www.virtualopensystems.com/en/solutions/guides/kvm-on-arm/

What is faster, this board or a Wandboard quad ?

Honestly after the mess that is getting working SDHC (in any combination) with the C1 I purchased, I’d rather Hardkernel spent less time on new designs and more on ensuring the software for their existing boards actually works. Definitely won’t be buying this

@Leonardo CPU should be at least 2x faster for the odroid, GPU should be 5 times faster (http://kyokojap.myweb.hinet.net/gpu_gflops/) in 3D, 2D should be faster on wandboard (if driver is working); not sure how gb ethernet and sata are implemented on wandboard, but if connected to USB2, then gb ethernet and sata should be significantly faster on odroid. i think they kept the previous platform for software compatibility, getting the exynos7 would have meant higher costs (probably close to 200$ board) and again starting the software from 0, lots of bugs. with the 5422 tho`, they already had lots of stuff… Read more »

Wandboard is based on i.mx6 and this processor has some problems with gigabit ethernet and it only achieve ~450 MB/s. Furthermore wandboard uses DDR3 2×32 bit but it is only ~10% faster than 32 bit interface ( true 2×32 interleaved performance is only available with LPDDR2 memory ).

With a wandboard you can have 100% free software, I think (U-boot, kernel, etc.), without graphics acceleration and SDMA . What about Odroid-xu4 ? I heard samsung processors need propietary blobs to boot ? Or the modem controls the CPU? Or was it Qualcomm ? Maybe this is in other CPUs in mobile phones but not this one ? Does anyone know how much propietary software you need ? Thank you.

Another difference is the wandboards are fanless. And draw a little less power (2,5A, 5V). But I guess efficiency per watt is worse.

Very good board, I have a cubox and I’m a bit limited by the CPU for my usage, also I’m limited by RAM (I have 2GB, but now cubox ships with 4GB).

This board is great and should provide me enough cpu power, but still not enough RAM, does someone know an ARM board which provide at least 4GB ram ?

@memeka The wandboard have sata2 and it is fast but the network is slow, aprox 45MB/s in latest mainline kernel.
About the USB 3.0 is it stable and faster enough to use with a HD/SSD at full time ?

@leonardo – good question. from what they published, the network is way faster, and it has its own USB3.0 host. The other 2 USB3 share a host, so speed might be affected if you use some other high-speed device on the other port. So connecting 2 SSD drives would not be a good idea, as they share the bandwidth. But theoretically with one SSD you should get faster speeds than SATA2.

They currently don’t have AArch64/ARMv8 64-bit board. 7420 (14nm) + 4GB would be nice to have, probably even better to wait for Exynos M1 at this point. Hardkernel never pushed for upstream support for these boards, but Samsung developers are now adding upstream support for a number of Hardkernel boards. Hardkernel provides the best Samsung community boards, not like Ardnale. I am getting more and more attracted to 96Boards as they are require upstream support. I trust Linaro more.

Once you tweak the configuration of the Odroid XU4 it is a very fast, stable and versatile device:
Out of the box in Ubuntu 15.04 there is no flash support, GPU clocked to fast (unstable), Chromium and VLC not configured to use GPU hardware acceleration and switching from full screen apps to X11 causes a black screen because there is a MALI driver bug. But all of this issues can be resolved by changing the configuration and installing some software packages. http://bitkistl.blogspot.co.at/2015/08/odroid-xu4-features-in-detail.html

In 2017, we are planning another 64-bit ARM platform and a 64-bit X86 platform, and we are also considering an upgraded version of XU4.