EZCast is a technology that allows screen mirroring and expansion over WiFi or Ethernet, and based on Action Micro SoCs. The products also usually include Miracast, AirPlay, and DLNA support, and work with Android and iOS devices, as well as Windows and Mac OS computers.

The company behind the products has now launched a giveaway campaign where it plans to giveaway 100 EZCast LAN (aka Tronsmart T3000) and 100 EZCast music devices until August 20th. You’ll need a Facebook or Google+ account to participate: 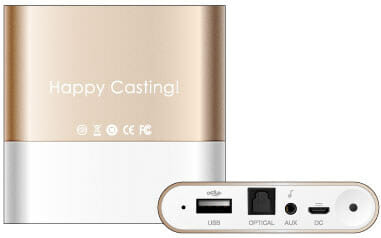 Winners will be selected randomly each day, with their name posted on G+ or Facebook. Good luck.

Thanks to VMG for the tip.

Small correction: It’s Actions Micro, not Actions Semi (same group though).
Unlike Actions Semi ARM SoCs, http://www.actions-micro.com/product.html#AM8251 is not very forthcoming about the CPU, merely saying it’s a RISC core, and you previously hinted it may be a MIPS core.

@J-L: Many thanks for your article about this promotion. After winning one of the prizes today I would understandably encourage others to enter!

These EzCast/DLNA/AirPlay devices now support most of the popular android movie streaming apps such as Showbox, MovieHD, MovieDroid, CartoonHD, TVPortal and offer a much more user friendly experience than Kodi which is also supported.