EZCast dongles are wireless display dongle supporting Miracast, DLNA, Airplay, and EZCast protocol, and are all based on Actions Semiconductor AM8251 MIPS processor. The company has now designed AM8253 SoC specially for audio applications using these standards, and found in upcoming products such as UyeSee WM201 Wi-Fi music streamer. 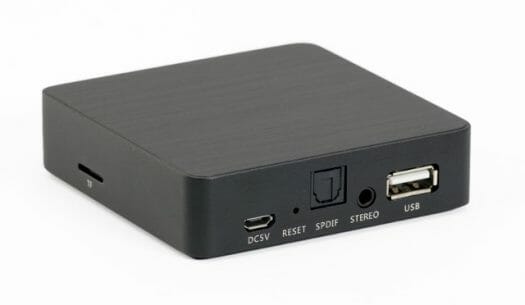 This wireless audio streamer comes with a USB cable, an audio cable (for 3.5mm jack), and a user’s manual. The functionality should be similar to SoundMate M2, except that EZMusic app for Microsoft Windows, Mac, Android, and iOS will be provided instead of controlling the device via a web interface. It should also be possible to use it with Linux using a DLNA client (TBC).. You can also play music from a micro SD card, or a USB mass storage device.

There’s no mention of the architecture for the RISC processor, but it should probably be MIPS like for AM8251. The blank rectangles in the block diagram, are probably because they used an old block diagram with GPU and VPU used in AM8251, which is not needed in AM8253 audio processor. There’s also no mention of any operating systems, but it’s probably a Linux based device.

The product should eventually be listed on Uyesee audio streaming page yet, and a dedicated website should be launched on www.ezmusic.cn soon (site is down for now).

Depending on the price, this should be a very interesting addition to a home Hi-Fi system.

@Jean-Luc Aufranc (CNXSoft)
The end price for SoundMate would be around 35USD, More ports and bigger casing . cost is higher than dongles.

Nice specs.
Anyone know if there’s kernel sources for the AM8253 ?

@dhead666
Source code :). Even AM8251 source code is not available.
To get a better idea of the mentality of the company, I’ve seen what amounts to be a marketing document released only under NDA.

does it stream direct to http internet radio adresses. and still with the smartphone off : meaning does it continue the direct stream without need for the smartapp after online radio link is inited ?

Mine doesn’t, but to be onest I didn’t use it for a long time and so its possible there was an update. Upnp didn’t work on mine either, but it was mentioned on the box it was upnp/dlna compatible.
It’s not worth the money. Better buy a pi and a dac and put something like volumio or runeaudio on it.

Yesterday evening, I took my soundmate for a 2nd look. Seems there was an update, so it seems they still update this thing. That’s positive. Now I could find the Upnp client on the device. No server though.