Non-volatile memory is usually the bottleneck in electronics systems and computers, as it takes much longer to move data from storage than in RAM or cache, so any improvement may yield great benefits, especially when your application requires lots of I/Os. Micron and Intel claim to have developed a new category of memory, and announced 3D XPoint (Read “3D cross-point”) memory as the first break through since the launch of NAND Flash in 1989. 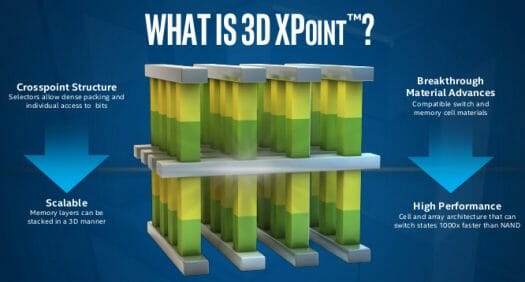 There’s great variability between different NAND flash chips, but the companies announced that 3D XPoint is 1,000 times faster and endurant (write cycles) than NAND flash, and 10 times denser than conventional DRAM. The technology would mainly benefit most applications, but especially more demanding ones such as high resolution gaming (4K/8K), real-time pattern recognition, and genomics.

Based on the presentation video below, it even seems 3D XPoint memory can be used to replace RAM and NAND chips by a single chip. 3D Xpoint would still be slightly slower than current DRAM, but latency is comparable, and you would not need to load data from storage to RAM, since 3D Xpoint would be both system and storage memory.

You can also read 3D XPoint presentation to find out a little more.

3D XPoint technology will sample later this year with select customers, and Intel and Micron are currently developing products based on the technology, so I assume we might start to see the first products featuring 3D XPoint memory sometimes in 2016.

Very nice for you to notice this one.
3D XPoint isn’t exactly unified memory, but with further development that is already on track it has the potential to replace RAM on almost all computing devices.
For instance H-P is working for some time on new compilers designed to run code (applications) directly from storage.
This is the future, this is a big revolution and is happening now.