WiFi smart sockets have come down in price with products like Orvibo Wiwo S20 selling for $16, but if all you want to do is control your lights, there’s an even cheaper option with Semlamp SL-012 lamp controller selling for just $11.92 on DealExtreme and allowing to control two lights independently with Android or iOS mobile devices. 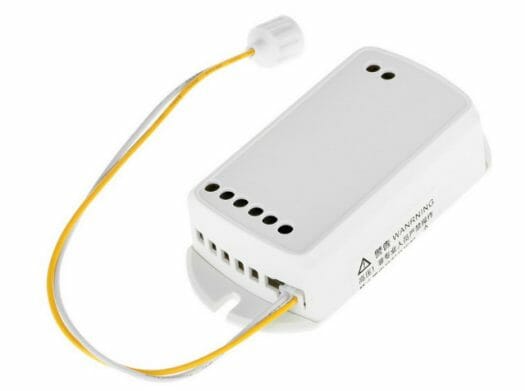 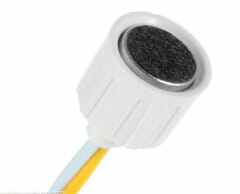 Right, not that much information, and nothing about wireless connectivity. But the description also mentions that the device does not use Bluetooth, nor WiFi. So how is that possible? The answer lies with another picture shown on the right….

A microphone is attached to that yellow cable, and they are using audio to control and dim the lights wirelessly with the apps emitting sound. There aren’t any links to the apps in DealExtreme, but I could find an Android apk and Semlamp app on iTunes via semlamp website (Chinese only).  I don’t have the hardware, but I tried the Android app on my smartphone anyway. It’s only in Chinese, but I could select SL-012 (They also have SL-011 for one light or SL-013 for three lights), and pressing one of the on/off buttons will play 4 notes. They all seem the same for different buttons though, so I’m not sure how it is supposed to work. I really doubt dimming works too.

The app shown on DealExtreme is in English, as shown on the left on the picture above, but the app downloaded directly from Semlamp has a green background instead as shown on the right. SO maybe there’s another download link for a more recent version of the app.

If you only need to control one light, you could go with SL-011 for $8.64, while SL-013 will control up to three lights, but I can’t find any retailer selling it yet.

Audio as remote control? My parents’ Nordmende TV had that, 35 years ago. Their dog didn’t like the high frequency sound at all.

Security at it’s finest 🙂 With amplifier powerful enough, you can just cruise through the city and turning the lights on and off for whole block…
Those extra $4 for SSL encrypted traffic is worth it.

English version for the app: http://semlamp.com/app/LightAPP.html