VIA Embedded Store has just sent a newsletter to announce the launch of the company’s latest rugged embedded computer, AMOS-3005, powered by VIA Eden X4 processor and VX11 media processor and chipset, supporting temperature ranges from -10°C to 60°C, and featuring a flexible 9V-36V DC input. 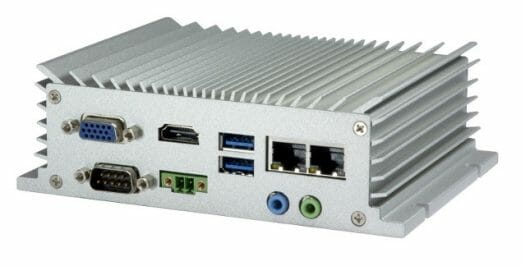 The kits includes AMOS-3005 system, a 12V/5A AC-to-DC adapter with a 2-pole phoenix plug to DC jack, screw packs for mounting and  Mini PCI-e card,  washer rubbers pack, thermal pad for the mSATA module, and a syringe with thermal grease. The computer also supports Wall/DIN rail/VESA mounting system. Memory and storage are not included, which means you’ll also need to install your own operating systems, which can be Windows 10/8.1/8/7, WES 7, or Linux distributions.

The computer targets industrial automation, remote terminal and data collection, as well as in-vehicle computing applications. The barebone system is not quite cheap, but it’s expected for an industrial & automotive PC, as it sells without storage nor memory for $539 on VIA Embedded Store. More details, including the user’s manual and Windows drivers, can be found on AMOS-3005 product page.

@Jean-Luc Aufranc (CNXSoft)
Hi! Just to clarify, the ARTiGO A1250 is a QuadCore E-series, a different (older) CPU, not an Eden X4. Also, the biggest part of the price difference is that the AMOS series are ruggedized systems for harsh environments (e.g. in vehicle, factory,…), while the ARTiGO series is optimized for signage and normal environments.

Thanks for the very detailed write-up, though! Happy to answer any other questions too! 🙂