Last year, I discovered one company developing and selling 360 degrees video recording solutions, and you could then watch the videos using a VR Kit like vrAse, Google Cardboard, or Oculus Rift. It was all cool, but  involved a camera mount for 6 GoPro cameras with a total cost well over $2,000. This year, GoPro also unveiled their own camera array for 16 GoPro cameras, again very cool, but even less affordable to the masses. But thanks to two CES 2015 videos recently uploaded to ARMdevices.net, I found out about two interesting sub $500 cameras that can record 360 degrees videos at 1080p, which can then be optionally uploaded to YouTube 360˚,  and watched with a VR Kit, using a tablet, or on a touchscreen enabled video sphere. 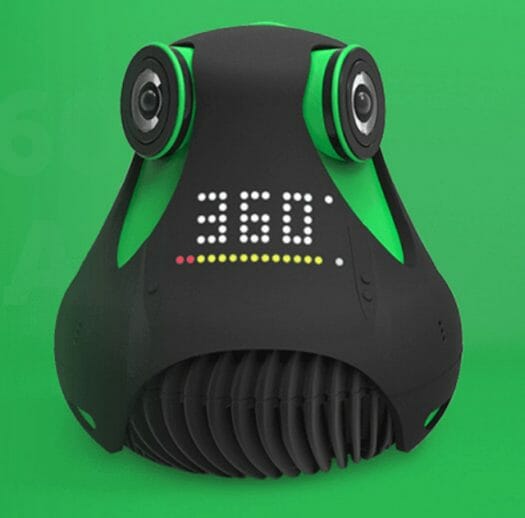 The cool looking 360 degrees camera comes with 3 lenses, a Nike+ Fuelband like display, WiFi or Ethernet connectivity (depending on model), a micro USB port, a miro SD card, and a battery. It can record 360×300 degrees videos. There’s also a light bulb mount if you want to use to monitor a room 24/7.

Some of the features and specifications for this camera:

It’s recording with H.264 video codec, and can also take pictures with features like time-lapse, timer and HDR. You can find some more info by watching Charbax’s video (12 minutes).

The project actually launched on Kickstarter in May 2014, and was quite popular as nearly 4000 backers raised about 1.4 million dollars to fund development and mass production. Delivery was scheduled for November 2014, but so far the camera as not shipped to backers, and also progress are been made, people are venting their frustration in comments, especially as video quality was not quite as expected in the last update in July. You can check a recent videos sample on YouTube, or download 360Cam Android app for more demos.

The camera is available for pre-order for $499, and more information may be found on 360.tv website. 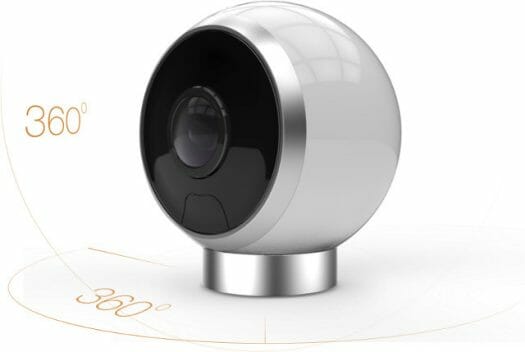 The second camera is made by IC Realtime, a company that makes CCTV camera for businesses, and is now working on various consumer 360 degrees camera such as ALLie Home pictured above. It features two lenses only, but can still manage to record 360˚x360˚ videos without blind spots according to the company.

I could not find much in terms of specifications, but we do know the cameras are based on Qualcomm Snapdragon 800 series.

[Update:I’ve been informed product details are available on icrealtech.com website (no direct link available, click on products and ALLie Home:

What you get in the Box:

You’ll see several models on Charbax’ video, as well as some demos with recorded videos (racing car, drone…) as well as live cameras shown on a tablet, all of which look quite good to me.

The company representative at CES 2015 said the consumer version should go for $399, and the professional version for more than $1,000, although the price was not fixed yet, but ALLie Home camera is up for pre-order for $499 including ground shipping in the US ($50 to overseas), with shipping scheduled for October 2015. The company also own IC720.com website, but there’s not much more information right now.

dave jones from eevblog had one of the early cameras a ~month ago? video quality was worse than BAD, sound was choppy and distorted, it was very nice hardware producing GARBAGE results 🙁

@rasz_pl
That’s probably why they did not send rewards to their Kickstarter backers yet.
Hopefully the final version will be much better.