Based on the comments I read on this blog many people are early waiting for 64-bit ARM boards. There are already ARMv8 server boards by Applied Micro, AMD and others, but these cost several thousand dollars and are not sold to individuals, and ARM recently launched Juno development board, but it should be well over the budget of most hobbyists too. But the wait may soon be over, as Padnews found out Allwinner and Merrii Technology showcased Nobel64 development board powered by a yet to be announced Allwinner H64 64-bit ARM SoC at the Hong Kong Electronics Fair. 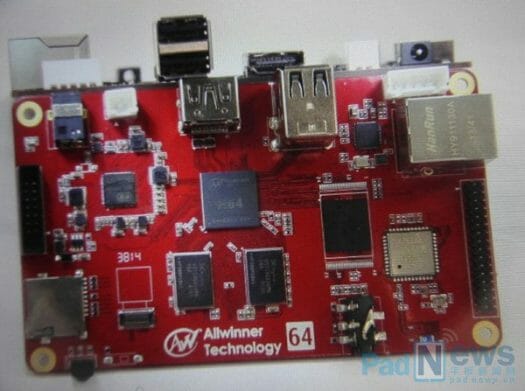 Allwinner SoC roadmap published about a year ago mentioned an Octa-core 64-bit processor (A9X) for Q4 2015, so there must have been changes in their plan, and the company decided to speed up their 64-bit roadmap. Allwinner have A-series (Application), V-series ( Video (camera)), and H-series (Home Entertainment?) processor families, so H64 could be specifically designed for TV boxes and game consoles, just like the recently announced Allwinner H8 processor. Having said that, Allwinner claims “Nobel64 board is suitable for development projects such as tablets, OTT boxes, notebooks, digital signage and AIOs, etc.” The board will support Android L.

The company has not released any pricing or availability information, but based on the features, and PCB dimensions, I would  expect the board to cost a couple hundred dollars at most.

Update: I’ve received an email from Allwinner with an explanation for different series:

This would be PERFECT. =)

No SATA, not even USB 3.0, so storage options aren’t great.
And only 2 GB of RAM?
I guess this could be a media player, but why do you need a 64-bit CPU for that?

@Sander
I think I made a mistake here, V-series are for automotive DVRs, but also for other camera applications, so it must be for Video instead.

Probably will hold off until Tegra K1 64-bit (tegra132) or Exynos 7. I am hoping at least for 4xA57 with 3-4GB of RAM or something similar in power. I started to like Jetson TK1 as it support SATA. BTW, there is erratum in early A53 revisions for 64-bit multiply-accumulate instruction. Details here https://gcc.gnu.org/ml/gcc-patches/2014-10/msg00906.html Should be in GCC 4.9.2.

@Freire
Great. So H64 availability is scheduled for Q1 2015, if I understood correctly.