Tronsmart Ara X5 is one of the first Intel Atom X5 mini PCs available on the market, and should provide a decent update to the many Intel Atom Z3735F based devices with its Atom x5-Z8300 quad core processor. GeekBuying sent me one sample for review, and today I’ll take a few pictures, and take it apart to find out more about the components used and its thermal design, before doing a review in the next few days.

I received the fanless computer by DHL in the following package together with a EU to US plug adapter. 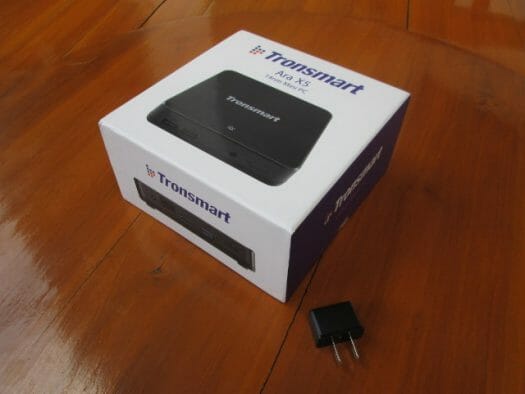 Ara X5 ships with a 5V/3A power adapter, an HDMI cable, and a user’s manual in English.

The front panel has two USB 2.0 host ports, a 3.5mm headset jack, and the power button, while the rear panel features the power jack, a Fast Ethernet RJ45 port, HDMI output, a USB 3.0 host port, and a micro SD slot.

The main improvement compared to previous generation boxes based on Atom Z3735F is support for USB 3.0 host port, so it would have been extra nice to have a Gigabit Ethernet port too. Maybe with other models.

I’ve struggled a little more than usual to open the box, but the teardown procedure is quite standard: removing four stiky rubber pad on the bottom of the case, loosening four screws, and take out the bottom cover. It’s held with clips so I had to use my dissassembly toolset to pop it out.

There’s a CR2032 battery for the RTC, something you won’t find in most Android TV boxes, as well as AP6330 wireless module for dual band WiFi and Bluetooth 4.0, as well as COTOP C1602NS chip for Ethernet. One of the serial code is a MAC Address starting with 30:F7:07 prefix that looks up to Shenzhen Thread Technology Co, which could also be VX2 mini PC manufacturer.

Let’s carry on the teardown, by removing two more screws in order to take out the board from the case. 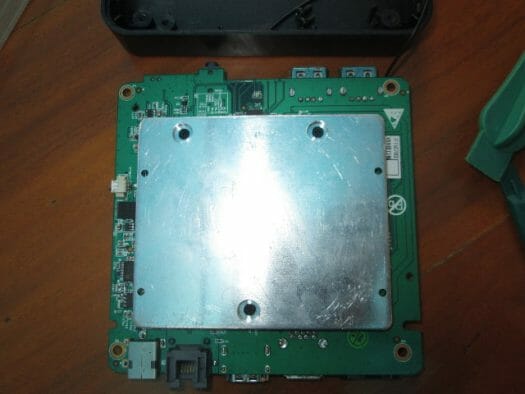 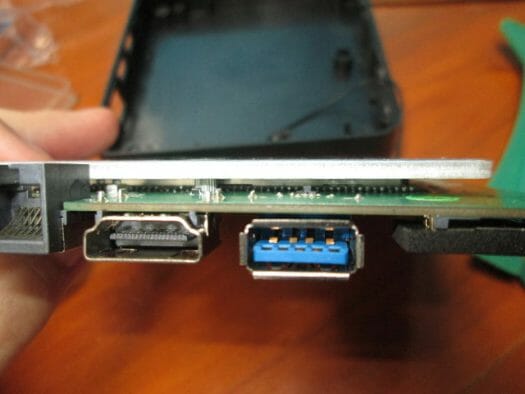 It can be easily removed after loosening the three screws holding it with the rest of the board. 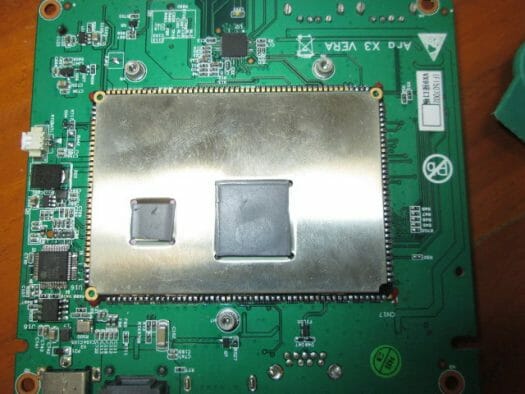 Interestingly there seems to be a CPU module covered by a metallic shield. You’ll have notice the name of the baseboard is Ara X3 VERA, so an Atom X3 model may be in the work, or it was canceled, and instead they leveraged the baseboard to fit it with a more powerful Atom X5 processor. 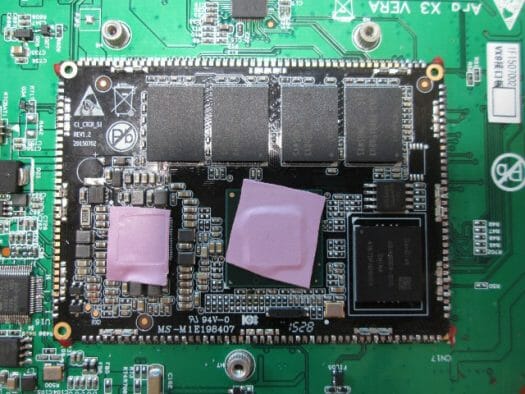 The metal shield shield is very easy to take out, but they must have made sure thermal dissipation was optimal, and we can find two more pink thermal pads on the PMIC and Intel processor. 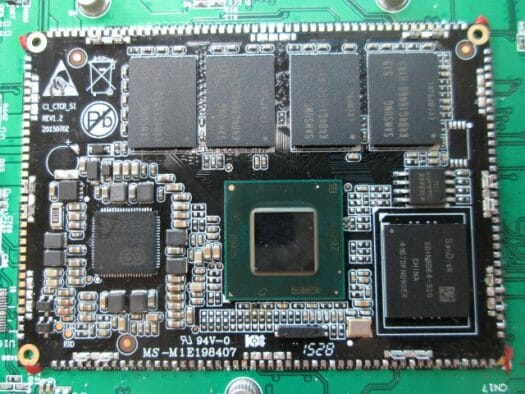 I’d like to thanks Geekbuying for providing the device for review. You can buy it for $149.99 including shipping, but possibly less if you are lucky, as they have a lottery for coupons. It can also be purchased on Ebay for $159.99 and more online sellers should soon list it too. These are actually pre-orders as shipping is scheduled for August 31.

Are you sure it got a fast Ethernet vs Gigabit?
If so, that’s an epic fail once more.

I have not tested it yet, but the specs on Geekbuying read “100Mbps Ethernet”.
That sort of makes the USB 3.0 port useless, as 100 Mbps is also a bottleneck for USB 2.0.

Can x5 decode HVEC in hardware? That would make it a future proof htpc.

In theory yes. I’ll test it in Kodi 15.1.
I think video output is limited to 1080p (TBC) however. So it’s future proof until 4K content becomes more popular. 4K H.265 decoding might work, but downsampled to 1080p. That will also be tested.

Geekbuying is trash. I ordered an rk3368 box from their promotion almost 2 months ago that hasn’t shipped yet. Only sign up for this if you want to get your money took with no product ever being shipped. Think ill wait for PIPO to release their Cherry trail box @ 100 dollars and order from gear best who can actually manage to ship things on time.

Hi, it looks nice. Is an IR-Port inside?
Thanks

@Loïc
As you can see from the pictures of the board, there’s no IR receiver, so you’d need to use a Bluetooth or RF remote.

alwaysbless : Geekbuying is trash. I ordered an rk3368 box from their promotion almost 2 months ago that hasn’t shipped yet. Only sign up for this if you want to get your money took with no product ever being shipped. Think ill wait for PIPO to release their Cherry trail box @ 100 dollars and order from gear best who can actually manage to ship things on time. Hi Dude. Eric from Geekbuying, I thought i have replied your on freak tab PM, we are sorry for the delay your orders, and we have free update your order to dhl… Read more »

If it is DOA, we have no excuse to refuse your refund request, please let me know your order number, i will check.

eric : alwaysbless : Geekbuying is trash. I ordered an rk3368 box from their promotion almost 2 months ago that hasn’t shipped yet. Only sign up for this if you want to get your money took with no product ever being shipped. Think ill wait for PIPO to release their Cherry trail box @ 100 dollars and order from gear best who can actually manage to ship things on time. Hi Dude. Eric from Geekbuying, I thought i have replied your on freak tab PM, we are sorry for the delay your orders, and we have free update your order… Read more »

Interesting that these boxes are now using CPU modules with the newer Cherry Trail cpus.
Did anyone try to trace the modules ? Looking on Alibaba and Aliexpress I can’t find it.

@FergusL
I have sent an email to Shenzhen Thread Technology last week-end, but so far I haven’t received any answer. It was just about writing an article about it. If you send something about buying 10,000 pieces, you may get a different answer :p

@Jean-Luc Aufranc (CNXSoft)
As I have commanded consultation Tronsmart and answer me this:

No signal over HDMI from my ara x5, used it for about a month and it died. Power led is on, tried disconnecting the battery, still no luck… no signal. Tried different HDMI cables and different TVs, even a pc monitor, still nothing. Looks like I just lost my $150. 🙁