LimitFrog is a tiny board powered by STMicro STM32-L4 microcontroller with Bluetooth 4.1 connectivity, plenty of sensors, and that can run code bare metal as well as RiOT real-time operating system. 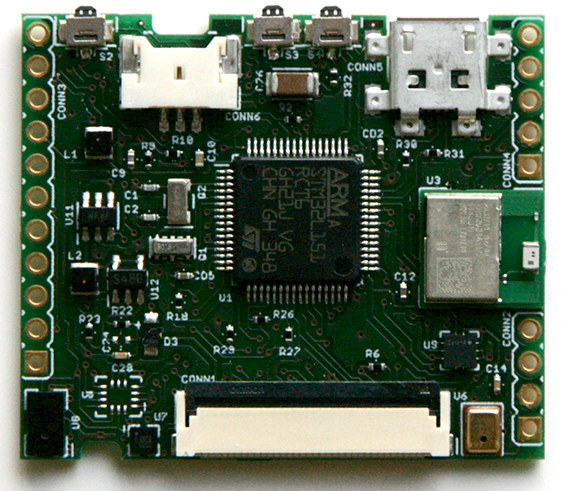 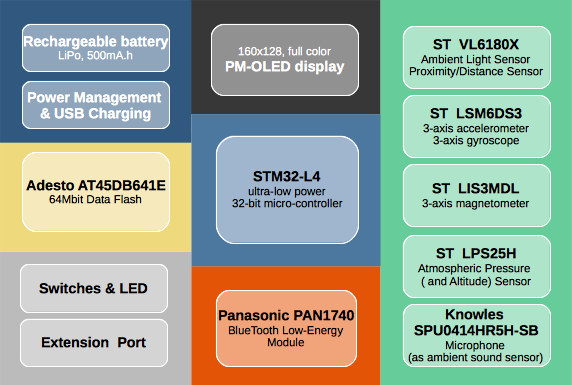 The “basic” version does not come with sensors, Bluetooth 4.1, nor OLED display, so these are optional, and three more versions are offered “Sense”, “Sense’m comm” and “Full Monty” if you want more features.

LimiFrog can currently be programmed in C/C++, and MicroPython support is in the works. The libraries include a USB stack, a FAT file system, and graphics support. As mentioned in the introduction, programs can run bare metal, or using RiOT real-time operating system.

The company also provided a code sample in C if you want to check what the API looks like.

The project has launched on Kickstarter, and rewards start at 39 Euros for the “basic” version of the board with a LiPo battery, software packages, 3D printer files for the case, and up to 99 Euros for the “full monty” including Bluetooth 4.1, the OLED display, and all sensors. Delivery is scheduled for January 2016, and shipping costs between 8 and 12 Euros depending on the chosen rewards. More information may also be found on Limifrog.io.

Interesting, seems like a development of the old STM32F4-DISCOVERY board. The kickstarter doesn’t say what sensors (if any) the BASIC model has, i think it would be a bit useless without any of the sensors really.

So for the price of a smartphone (99 Euro) you get a wearable sensor set, but with less RAM and CPU than a smartphone?
Hmmm … does not sound very interesting to me. I would be interested in such a wearable for 25 Euro. And a basic wearable for 12 Euro.

Hi Brian, It’s a new dev, not derived from F4-DISCOVERY. The idea is to come up with something much more compact than classical dev boards, while pre-integrating more features. The “basic” version does not have the sensors – it’s a minimal version which, compared to a standard MCU dev board, brings: lightness (20g or so) and compactess, some integrated data storage (64Mbit, usable as file system) and integrated USB-rechargeable LiPo battery — will also run MicroPython if you like it. But I agree it’s probably not the most interesting version for many people, who may want to check the next… Read more »