UDOO Neo was unveiled last February as the first hobbyist board features Freecale i.MX6 Solox Cortex A9 + Cortex M4 processor. I was expecting UDOO to design support board since their earlier UDOO board combined Freescale i.MX6 processor with an Atmel MCU, and the new processor allowed for integrating the same functionality into a single chip. The board is now on Kickstarter where you can pick UDOO Neo Basic for $49 (Early bird is $35), or UDOO Neo for $59 (Early bird was $45) adding an Ethernet port, some sensors, and 1GB RAM, instead of 512 MB for the Basic version. 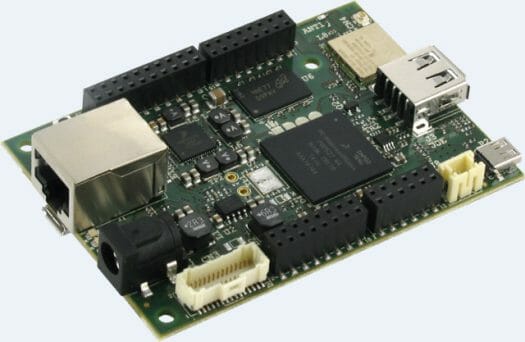 But both versions of the board basically share the same specifications:

The board features Arduino compatible headers, and can be programmed with an Arduino IDE running on a separate PC or in the board itself. It has similar functionalities as the Raspberry Pi as it runs Linux (and Android), and offers similar interfaces, but adds Wi-Fi, Bluetooth Smart, and 9-axis motion sensors. So if you have a project that requires the power of Linux, and the I/O flexibility of Arduino, UDOO Neo boards should cost a little bit less than competing solutions, be easier to configure, and provide a more compact solution.

The ARM Cortex A9 core will run Android 4.4.3 + Linux 3.10, with UDOObuntu distribution to become available before the board ships, and the ARM Cortex M4 should run MXQ RTOS. Android and Linux source code will be provided. They also claim UDOO Neo will be open source hardware like the original UDOO. However, a Google search for the older board only shows UDOO schematics in PDF format, but after checking a bit more, I found the documentation page where the Gerber files, BoM, and mechanical files are also freely downloadable. Since the original schematics are not available, it’s not 100% open source hardware, but it’s still better than what is provided for the Raspberry Pi boards.

Since it’s UDOO project team have been around for a while, there’s already an active community, and several example projects for the older boards, but many should be adaptable to the Neo boards, and since it’s Arduino compatible, you can also leverage existing Arduino libraries and sketches.

The Kickstarter campaign started yesterday, and they already raised over $40,000 out of their $15,000 goals. Beside the pledges for UDOO Neo boards, they also have various kits including one with a 7″ LCD touchscreen display, a power supply, and cables, and bundles with up to 5 boards. Delivery is scheduled for September 2015.

A few more details may also be found on UDOO Neo product page.

amazing product 😉 cheap and power full 😉 for plus version 😉

That might come handy, I back the basic version. Let’s see how fast they are gonna deliver.

Do they support Kodi/XBMC on these Udoo series?

@Harley
It’s not exactly what their platforms are aimed at, but they still have XBMC images for Udoo dual and quad and an OpenELEC image for the quad @ http://www.udoo.org/downloads/

@hani
It’s a Linux board, so you should be able to run C# program with Mono (http://www.mono-project.com/).
I’m not sure if you can access the I/O pins easily in C# however.

Original schematics are not available? Of course they are, may be you just have to search a bit more.
http://www.udoo.org/other-resources/

@Andrea Rovai
Still only PDF as mentioned in the post.