Mali-400 was announced in 2008, and since then has been used in various SoCs for smartphone, but now it’s mostly replaced by Mali-450 GPU in low cost mobile and STB SoCs, although Mali-400 is still being implemented in new SoCs such as Rockchip RK3128 processor. ARM has been working on a lower power version of the GPU, and just unveiled Mali-470 GPU targeting wearables, as well as embedded and IoT applications. 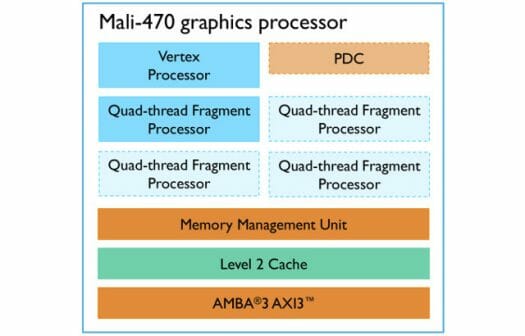 Mali-470 GPU is said to use the same memory and AMBA interfaces as Mali-400, while keeping some of the improvements brought to Mali-450 GPU, and further lowering power consumption to just half of that Mali-400 in terms of mW per frames per second.

Just like its predecessors, Mali-470 supports OpenGL ES 2.0, and like Mali-400 it will scale from 1 to 4 fragment processor, always combined with one single vertex processor. Mali-470MP1 is likely to be used in wearables or other applications with tiny displays and low power requirements, while Mali-470MP2 and Mali-470MP4 might also find their ways into more demanding applications.

If Kodi doesn’t clean up their act, why will anybody need any Mali’s

@NIPSZX
That GPU is mostly for devices like smartwatches or trackers, and possibly other devices with a control panel such as washing machines, CNC machines…

@Jean-Luc Aufranc (CNXSoft)
depend on the economics, it could go into tv boxes too.
i mean, mali-400 was design for tablet/smartphone, but went into smartwatches. it could be used for tv, if the price is right. All those new Chinese soc with mali-400 gpu could be updated to mali-470 more easily compared to mali-450, since they share the same external interface.

on a side note, free the drivers ARM. imagination gonna do it soon, so why not release them driver.

[quote]
imagination gonna do it soon, so why not release them driver.
[/quote]

yes they are…..
http://www.phoronix.com/scan.php?page=news_item&px=IMG-Hiring-For-Open-Driver
lulz

@milkboy yeah don’t read too much into that. 1) that was in july. the job position is still open, they did not hire anyone as of today. 2) RPi hired a guy to open up their driver more than 6 months ago. They are talking about adding initial support in the upcoming 4.4 kernel (http://www.phoronix.com/scan.php?page=news_item&px=RPi-KMS-Pull-Linux-4.4) and that does not include any kind of hw acceleration or power management. 3) The job listing is for: “As part of the Linux team you’ll be focusing on developing Linux and Open Source specific portions of our driver – the display controllers, kernel interfaces… Read more »

well one can hope….
hahahaha…..

i remember nouveau (nvdia open driver) taking 5yrs to reverse engineer & accepted into the main kernel as an
experimental driver, then another 2 years before being marked stable.

so, on the (2) point, RPi is right on track IMO, after all its only been 1 year+ since full documentation was release.
i suppose it will take another year or two before it move to a stable realease