Remember Snickerdoodle board? If you don’t, the board is one of the cheapest Xilinx Zynq available on the market, and the project is currently on CrowdSupply, and 75% funded with 28 days left. They’ve just posted an update about a new daughterboard that I found interesting: giggleBits which provides 5 Gigabit Ethernet and an SFP cage on top of WiFi 802.11 b/g/n and Bluetooth connectivity already found on Snickerdoodle board. 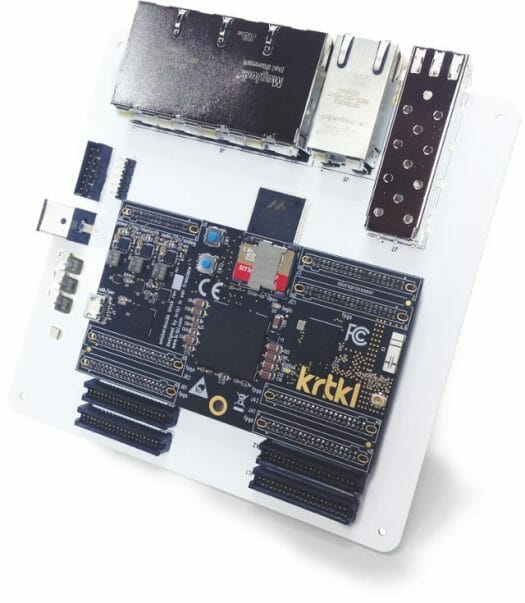 The board supports Linux, ROS, and FreeRTOS, as well as Ubuntu Snappy Core.

One of the reasons I found that board could be interested was the discussion about support for hardware acceleration for NAT, QoS, crypto some of my readers had on Turris Omnia board, and in theory the FPGA could be used to implement and experience various encryption for example, but that means the data would have to be routed to the Xilinx FPGA first instead of just going through the switch.

While giggleBits board itself is just $85 you’ll also need to add a snickerdoodle with down connectors, meaning the total price would start at $150 with a Zynq-Z7010 board with 512MB RAM, and up to $230 with Zynq-X7020 board with 1GB RAM. You’ll also have to add shipping to the price: $5 to the US, and $20 to most other countries.

Does Marvell switch connects to ARM GMII which is hard IP core? The switch chip is powerful and it can connect any SOC. Can I say the “reprogrammable router” has nothing to do with FPGA?

@Fan I think it’s connected that way too. But it should still be possible for example to implement encryption/decryption in the FPGA, and parse the data on the ARM core and get it encrypted / decrypted by the FPGA. Details would have to be looked into to see if it is feasible and/or bring any performance benefit. I understand that in many applications the traffic would just go through switch without being processed by the Xilinx SoC. Data from Ethernet to WiFi network would have to go through the Xilinx part, and then maybe in that case the FPGA could… Read more »

@Jean-Luc Aufranc (CNXSoft)
Yes. But I prefer it can handle advance routing like netfpga and cheaper than netfpga.

@Jean-Luc Aufranc (CNXSoft) Thanks guys for the comparison to a $10,000 product. That brought us smiles! BTW, the Marvell chip is an 88E6352 see here: https://github.com/krtkl/schematics/blob/master/giggleBits-schematic-r1p1.pdf It is similar to the 88E6350R but much newer. You can see a public description here: http://investor.marvell.com/phoenix.zhtml?c=120802&p=irol-newsArticle_print&ID=1562447 Key points over your analysis is that this adds TCAM, EEE and supports a SerDes for the SFP cage that is onboard the giggleBits In general our concept with this product was to *allow* for routing and acceleration of the Ethernet traffic passing through the SoC with the FPGA but not *require* it. This makes application development… Read more »

@Weatherbee
Thanks for the precisions about the Marvell part and your concept. The press release is dated in 2011, but Marvell does not have a product page for 88E6352…

@Jean-Luc Aufranc (CNXSoft)
Yes not sure what is going on there but I can promise you that we have real Marvell chips we are using.
As you know a lot of these networking oriented companies work under pretty heavy NDAs which we try to avoid whenever possible. Unfortunately there are no gigabit switch ICs available that I know of that are available with public datasheets that don’t require signing an NDA first.

IMHO the gigglebits is interesting also as a standalone product;

could it work also without the snickerdoodle plugged?

can one subscribe on crowdsupply only for this part?