Intel unveiled Intel Quark D1000, D2000 and SE micro-controllers last week, with Intel Quark D1000 available now for $2.5 to $4 depending in quantities, and to my knowledge the first Intel MCU that can be considered ultra low power. I could not see a development board at the time, but Intel does have an Intel Quark D1000 Customer Reference Board with a familiar Arduino form factor.

Information about the board is limited to the user guide, and I could find it on any distributors, so it’s probably reserved to Intel’s business customers. There’s also some information about Intel IDE for Quark D1000 and Intel System Studio for Microcontrollers on Quark D1000 “project” page. I figured out it would just take a couple of minutes to try out the tools, but I was wrong and I spent a couple of hours instead as there are so many steps…

My computer is running Ubuntu 14.04.3 LTS so I went ahead with the Ubuntu package:

Here’s you’ll find a README with the next instructions: 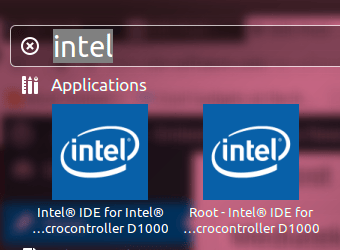 Too bad nothing happened with either the user or root version, and no messages were shown. So I launched it from the terminal:

OK… I think I’ve seen that before with Android Studio IDE, and it must be a problem with my Java version.

One of the installation guides (you need to look in a few place to find out the whole instructions) asks for Java JRE 1.7, and Eclipse IDE Luna version. So I’ve installed both, and configured Java to use JRE 1.7.

All good, and I finally succeeded in launch the Intel IDE!

It’s quite possible Intel is still working on their development tools, and that’s why they are not really announce the board to the masses, and possibly not streamlined the tools installation procedure.

I don’t have a board, so I could just quickly check the IDE features, and it looks pretty similar to the Arduino IDE.

There are classic and expert code samples for the board such as WiFi AP, Blink, I2C, GPIO, etc.. basically for all interfaces and I/Os of the boards. Programming is done in C, and the firmware is flashed over a usual serial connection. Seven Intel Quark D1000 boards are listed in the IDE, all apparently variations of the Customer Reference Board.

@Pedrito
The SPI is 32Mbit = 4 MB based on the user guide.
I can’t find anything about NFC. Is it for another CRB board?

A reference board will also be given away to one of the attendees.

Sounds interesting and good.
I googled a lot to search for the board shown in your post but ended up on website where they sell only main MCU chip.

Where did you get this complete customer ref board ?

Is it available in Europe ?

secondly,does it have analog output pins, not the PWM , the real DACs ?

@Electromania
I did not get the board. I’m not sure whether it’s available yet.

As for the I/Os, you’d have to check the documents links in the post above to find out. That’s all the info I have.

Quark D2000 board is now selling on Mouser for $15 -> http://www.mouser.com/ProductDetail/Intel/MTFLDCRBDAL/