FPGA board with Arduino headers are not exactly a rarity, for example Digilent ARTY in a larger form factor, and some developers have designed FPGA boards using Arduino Mega form factor, such as Papilio DUO and Arduissimo. But FleaFPGA Uno is the first Arduino Uno like FPGA board I’ve seen and it includes HDMI output, one USB host port, as well as an optional WiFi module based on ESP8266. 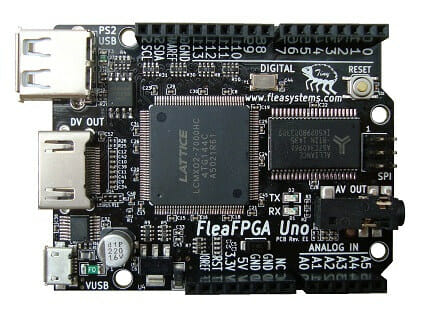 The Lattice FPGA will come pre-configured with F32c SoC (MIPS-compatible variant) by default, so if you’ll be able to experiment with the board first using the Arduino IDE as with any Arduino boards, before messing around with HDL language. Beside F32c SoC, several FleaFPGA Uno VHDL coding examples are provided including Sweet32 SoC, Simple LED ‘blinky’, and more to come. Programming the FPGA can be done with Lattice Diamond, and you should be able to get some support via FleaFPGA Uno forums.

Two versions of the board are available one for $50 without WiFi, and one for $60 with an ESP8266 WiFi module. Shipping is now included and costs $15 to the USA, $18 to to UK/Europe, and a quote can be provided for other destinations.  You can find more information on FleaFPGA Uno product page, and the presentation video below.