MINIX NEO U1 Android TV box, which the company prefers to call “media hub for Android”, has been announced last week, and has started shipping. The company sent me one sample of the Amlogic S905 device, as well as MINIX NEO A2 Lite air mouse which can be included with the box as part as some bundle. I’ll check out the media hub and air mouse today, as well as get a close look at the internals, before testing the device, and published a full review of MINIX NEO U1 lateron.

MINIX sent me the packages via Fedex and I received it within 2 or 3 days.

The devices comes with a simple infrared remote control, a micro USB to USB cable, a USB OTG adapter, an HDMI cable, a WiFi antenna, a 5V/3A power supply, a setup guide in English, German, Chinese and Russian, and MINIX product brochure.

The case is made of plastic, but still feels of good quality. All four side have some connectors or interfaces:

The recovery button is located on the bottom of the device. 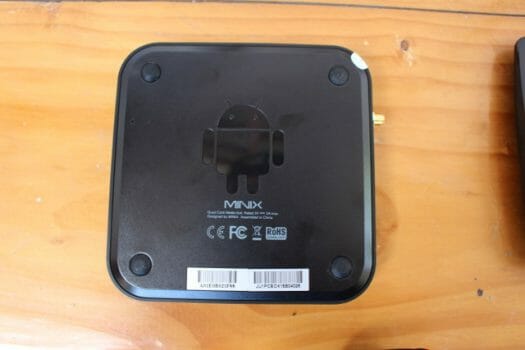 NEO A2 Lite is an air mouse with the following specifications:

Air mice with keyboard are my favorite input devices for Android mini PC, and I normally use MeLE F10 Deluxe, but MINIX NEO A2 Lite does look better, and if it works well, it might well become my main input device for reviews.

The remote is a bit larger than usual, but feel sturdier and fits well in my hands. For some reasons,  I appreciate the two bumps on the side, which hold the two AAA batteries (not included), and the RF dongle which you need to connect to one of the USB port of your computer, TV or media device.

Both have a D-pad, play/pause keys, volume +/-, mute, power button… but the MeLE air mouse also features an IR learning function, which never worked for me, but is missing from the MINIX one. I do like the mouse activation key on MINIX, as with MeLE F10 you need to press the left button to activate mouse mode, and this may trigger unwanted clicks.

But on the keyboard side, MINIX NEO A2 Lite might be the clear winner here, with larger keys, a layout similar to standard keyboards, and the Tabulation key which was never included in any of MeLE’s many air mice.

So all-in-all A2 Lite appears to be well-designed air mouse, but I’ll have to use it to find out if it performs as well as it looks.

I had to remove the four sticky rubbed pads on the bottom of the case, and loosen four screws to open the device. There’s a sticker on the side of the case, so doing so will likely void your warranty. The screws were quite firmly tightened, so I had to use a larger than usual screwdriver, i.e. not a precision screwdriver. 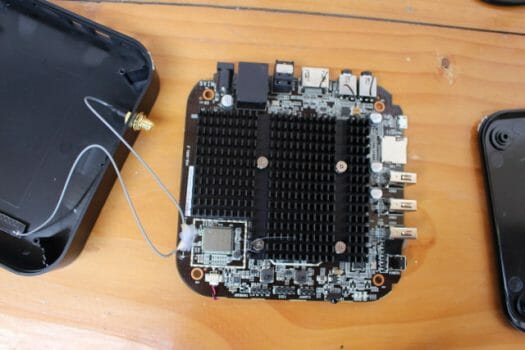 MINIX has taken cooling seriously, and they have a rather large heatsink covering most of the board including Amlogic S905, the RAM and eMMC flash chips. You’ll also notice two antennas: one external, one internal. The first impression is again one of quality.

Turning the board around will reveals a CR2032 battery for the RTC, something that’s rarely found in TV boxes, the recover button, and two SKhynix H5TQ4G63CFR DDR3 chips (2x 512MB). 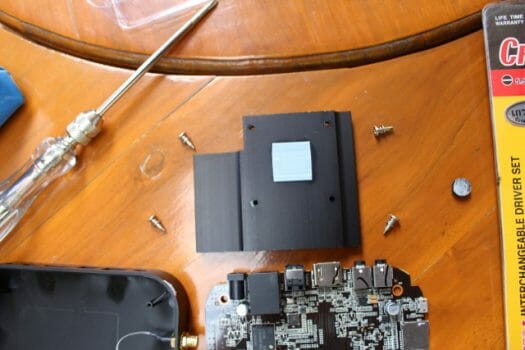 I’ve also removed the heatsink to have a clear view of all components on the board.

Sadly, I could not see whether the board comes with Amlogic S905 or S905-H processor as it was not readable, so I’ll have to find out during the review. Two more SKhynix RAM chip brings the total memory to 2GB, and a 16GB Samsung KLMAG2GEND-B031 eMMC 5.0 flash is used for storage. Most companies go with low end or mainstream eMMC flash, but the part selected by MINIX is part of the new high performance 10nm-class eMMC, and capable of 230 MB/s read, and 50 MB/s write speeds, with fast random I/O (up to 6000 IOPS) according to Samsung product selection guide. They’ve carried on with their no-compromise approach while selecting Ampak AP6356S wireless module that supports 802.11 b/g/n, 802.11ac up to 867 Mbps (2×2 MIMO), and Bluetooth 4.1.  Other noticeable components include GL852G USB 2.0 hub controller, ESS323? audio codec, Realtek RTL8211F Gigabit transceiver, and Nuvoton MINI54ZDE ARM Cortex M0 MCU to handle power controls. If you are interested in hacking the device there are three headers: JDEBUG1 with 3.3V/Tx/Rx and GND, ICE1 probably for Nuvotron MCU, and JUART1 with Tx/Rx/GND.

So I’m very pleased with that I’ve seen on the hardware side both with MINIX NEO A2 Lite Air Mouse, and NEO U1 TV box which makes use a much better components than the other Amlogic S905 devices I’ve seen so far. Quality does come at a price however, as MINIX NEO U1 sells for $129.99 on Amazon US, Amazon UK, DX.com, GearBest, GeekBuying and others, while the bundle with NEO A2 Lite goes for $149.99, and the air mouse is also sold separately for $29.99 shipped.

That’s for the hardware, and I’ll have to see if DTS and Dolby are supported, DRM implemented, and other bugs found in earlier Amlogic S905 TV boxes have been fixed or improved. An OTA firmware update is schedule for this week-end, with “big improvements to the KODI performance”, so I’ll wait for this before starting to test the device.

Does anyone have any reasonable launcher? Most of them look like something that would be a home on an old IBM PC Color or Radioshack CoCo computer.

Google has a reasonable launcher by default, which i’ve yet to see on these things. The one I have at the moment, which you reviewed a few years ago, is something called a UFO or such, and it has gotten unstable.

Luckily all it has to do is install and run BSPlayer for me, but someday it will probably quit being useful.

I’d like something with a reasonable pad type launch screen.

@Jim st
The default launcher on the U1 is the Metro launcher, but you can opt for the standard google now launcher too.

can I somehow pack a Linux onto it?

@Jean-Luc Aufranc (CNXSoft)
something like a noiseless internet surfstation… so a desktop ontop would be nice.

@Someone from the other side
Nice to see that some serious thought has gone into thermal engineering. I expect the benchmarks, in due course, will show that the big heat sink and the use of premium interfacing components will allow the AMlogic S905 to finally express its potential, after so many implementations that were just designed to be cheap, first and foremost.

@Tom Jones
On several posts on cnx-software it said the S912 was cancelled and will be replaced by a slower S908 sometime next year.

As I know the S912 will be real, for now it is not cancelled.

Some specs. as GPU are not clear yet.

Just confirmed with Amlogic, so, for now, no changes.

have someone tested this box with film/video file?
Before buying it i would like to know these performance.

@Javi
Reading between the lines, it seems to me that Cortex A35 would be very helpful in producing a “cost down” version of S905. Q3, 2016 seems like a reasonable prospect.

I could not use the gyro functions of the A2 lite. Am I missing something? I tried in Asphalt 8 and Walking War Robots.

Gimmy88 :
Hi,
have someone tested this box with film/video file?
Before buying it i would like to know these performance.
Thank you!

@Oren Thanks, Oren. I’ll take a look at it. I have a couple of units that do not have the generic builds, but are tv boxes which have not reacted nicely to the other launchers. Not sure why, they are black boxes. Cheap and work, but black boxes. I bought a couple of units with such as the Radxa Rockchip processor because of the performance, but the android interfaces have sucked. I guess the logjam of not having drivers have delayed getting out such releases as Lolipop and Marshmallow to the units out there. Android 4.4 stuck at Jelly Bean… Read more »

For reference, I had to change the batteries of MINIX NEO A2 Lite after about 5 months.