So far my quest for a smartwatch as not been successful, with massive disappointments with both No.1 D3 smartwatch and SMA-Q color e-Paper smartwatch, with the latter completely failing after a week. The next potential candidate is Makibes F68 with similar features as SMA-Q, but instead with a grayscale display, IP67 ingress protection rating which should make it suitable for (apparently not, see comments), as well as a promised 7-day battery life during “normal usage”. 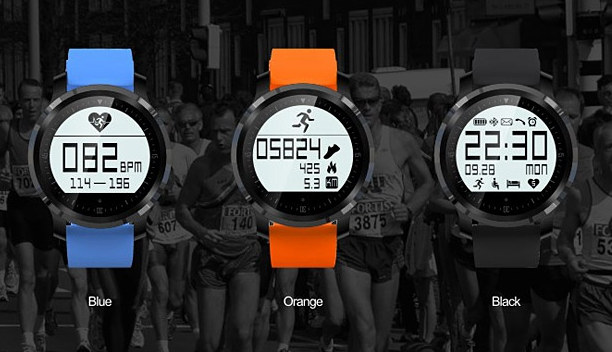 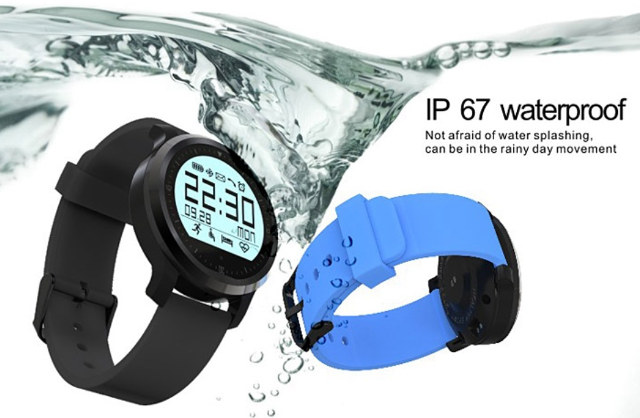 The watch supports Bluetooth 4.x enabled smartphones with iOS 8 and Android 4.3 or greater. Supported function include call and message reminders (Android only shown via icons on the watch, no text), heart rate monitoring, pedometer, sedentary reminder, sleep monitoring, alarm, and clock display. The app is called HPlus Watch and can be downloaded from Google Play or iTunes for iPhone or iPad. GeekBuying also released the user’s manual, and that’s how I discovered the device.

A video shows a little more how the watch and app works, and it looks good in theory, but we’ll have to see how well it works in practise, and the few app reviews so far are rather mixed.

looks quite interresting to me! Are you gonna test it Jean-Luc? I trust you 1000times more than any chinese/russian review on Youtube!

@Anthony.H
I’d like to try, but I’m expecting at least 3 more TV boxes, and one GTX960 graphics card before the end of the year, on top of the 3 or 4 devices I’ve not tested yet… So it may take some time. I actually like smartwatch reviews as they don’t really take much extra time to test, but I still have to write them…

Protected from immersion in water with a depth of up to 1 meter (or 3.2ft) for up to 30 mins

Well I just ordered it via ebay. I’ll let you know what I think or might do a review if you want!

@kuddy
IP67 should be good enough for swimming for a reasonable amount of time. If you plan on swimming between Calais and Dover, or go diving it won’t be good enough.

Hello,
I am new to your website, but I found your review of smart watches very useful!
Are you planning to review the iWown i7?
Thanks.

@VPO
I had never heard of this model. So I checked it @ http://www.gearbest.com/smart-watches/pp_265283.html
Some of the specs are interesting, but I can see “Waterproof rating: 30M water resistance “, which basically means it’s not really waterproof (same ratings as SMA-Q), and should just be watertight enough while washing hands, but not showering. So I’m probably going to give it a pass.

> IP67 should be good enough for swimming for a reasonable amount of time. No IPxx allows swimming at all. That “1 meter under water for 30 min” means static water pressure. When you make a stroke of your hand with a watch into the water during swimming, you can easily subject it to dynamic pressure much higher than that of tranquil 1m still water – coming from all sides, changing all the time. There’s also never talk of real-world sea water, or chlored pool water, mostly some distilled lab-only kind of water. Summing up: all the current smartwatches are… Read more »

That ingress protection rating is very confusing as there’s a lot of misinformation on the web… For what’s it’s worth I’ve been showering with an IP65 rated activity tracker for a year, even staying in hot Japanese Onsen for a few hours, and it could handle it.

I think I’ve just bumped into one good review on this watch: https://www.youtube.com/watch?v=03oIXxN9sq0. Kind of long but quite informative.

Well I ordered the day of this post and I just received it ! Not bad at all !
I have to test it now and see if is that good ! 🙂

@Anthony.H
Cool! Let me know if you find a way/trick to have the pedometer and HRM to work reliably.
I posted some of my impressions so far @ http://www.cnx-software.com/2015/12/29/makibes-f68-sports-smartwatch-unboxing/#comment-520808

@ano
I actually like the size. I don’t really like the lock however, so I disabled it by setting screensaver to 255 in the app.
By the way, I explain a few others things in the review @ http://www.cnx-software.com/2016/01/08/f68-smartwatch-review/

Mine was usedDin the shower a couple of times. Besides an accidental unlocking, it passed the test.
Nevertheless, even before the shower it has stopped recording my sleep. Any ideas?
Although the specs says it saves data for 7 days, the android app only shows data since last midnight. I can’t find any upgrade on the software.

BT keeps turning itself off without warning, This happens with my watch several times each day. Very annoying. Unlike another smart watch I tried which automatically re pairs with my phone when BT has lost connection, this one does not.