FriendlyARM NanoPC-T1 board powered by Samsung Exynos 4412 processor with 1GB RAM and 4GB eMMC flash was unveiled at the start of 2014 for $69. The company has now announced NanoPC-T2 with Samsung S5P4418 processor with 1GB RAM, and 8GB Flash, as well as WiFi and Bluetooth, as Gigabit Ethernet all of which were missing in the first version. NanoPC-T2 also has a power management chip, and a larger heatsink, meaning that it does not suffer from overheating like NanoPi2 according to FriendlyARM. 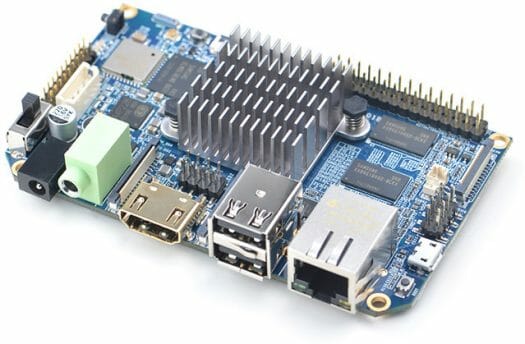 The board can run Debian and Android from either anSD card or eMMC flash using the boot selection button. The Wiki page is currently empty, but should eventually have all the technical details needed to get started and more.

NanoPC-T2 board will launch on February 28, 2016 for $59 + shipping on FriendlyARM shop. Individuals based in South and North America will instead be able to purchase it from Andahammer.

Why not 2GB RAM. Next to Odroid C2

Yes, the odroid-C2 looks much better and cheaper than this guy except for the on-board wifi&ble.

a bit pricey compared to competition now. any one actually know lithography process node of this samsung soc chipset (I mean with some official source specifiing it) or power consumption test ?

@data
28nm process according to the user’s manual @ http://wiki.friendlyarm.com/wiki/images/3/3d/SEC_Users_Manual_S5P4418_Users_Manual_Preliminary_Ver.0.10.pdf

To me it looks a nice board 8GB emmc, wifi, bluetooth, usb expansio headers, full size sd-card and all ports on the same side. I only wonder what about the samsung processor. There is not much information. Does it have a vpu (with h265 support), does it have mainline support, how is it performace.
59$ is not so expensive. If You want to buy an odroid with emmc, You will be on a higher price, and you don’t have wifi and bluetooth.

Despite my best efforts at getting answers out of FriendlyArm, the NanoPi T3 (and I’d guess the T2 is the same) SD Android comes in at 4GB and nothing I can do including instructions from FriendlyArm will increase that. I have a 64GB SD card and almost all of it is wasted. There HAS to be a way to expand to use the whole 64GB as internal memory – but I’m not getting anywhere.

Long answer: I have something like that for Rockchip Android @ http://www.cnx-software.com/2015/12/23/how-to-resize-androids-internal-storage-partition-in-rockchip-devices/, but for Samsung/Nexell there may not be any solutions (Edit: I first thought it was an Allwinner board).

I just goggled this does it help

@Jean-Luc Aufranc (CNXSoft) Most FriendlyARM boards aren’t Allwinner based but Samsung/Nexell, Pete’s PC T3 using an S5P6818 (Cortex-A53) and the T2 using S5P4418 (Cortex-A7). Both share almost the same kernel (unfortunately regarding T3/M3) so most instructions apply to both. I would use an x86 Xenial installation, do a backup of the card and then try to resize the data partition using GParted there. To do a device backup without wasting to much space I would recommend something like this (replacing /dev/sdd with the SD card’s device node): dd if=/dev/sdd bs=10M | 7zr a -bd -t7z -m0=lzma -mx=3 -mfb=64 -md=32m -ms=on… Read more »

Ok I’m part way there. A variation on FriendlyArm’s “solution” which simply would not work – turn out it was nearly there. Flash Android – and immediately pop the SD into a Linux machine -Raspberry Pi is fine – why they didn’t put out some Windows utilities I don’t know – they seem to assume everyone has a Linux machine whereas in the west the VAST majority of us use Windows – however…. With the SD in my Raspberry Pi – I checked /DEV/ to make sure there was an SDA – if it comes up as SDB change accordingly..… Read more »

Resizing the filesystem is a common Android problem, it is not specific to this board. Google around for various fixes.

The EMMC contains a signature that says it contains a valid boot image. Wipe out that signature (usually the first 10 bytes or so of the EMMC chip) and it will boot from the SD Card. This is controlled by the ROM on the chip. This is also a generic ARM feature that is not specific to this board.

Thanks for that Jon but an expert at this I am not. How would you wipe that out?