Recent processors all have the ability to adjust the operating frequency to either decrease power consumption, or make sure the processor does not overheat. That’s why for example Intel processor have a maximum junction temperature (Tj max) so that if this temperature is reached the processor can slow down to cool things off, and avoid damaging itself. That also explains why computers with the same processor, storage and memory may have greatly different performance under load depending on their thermal design.

I’m currently testing a fanless mini PC with an Intel Celeron N3150 Braswell processor, and yesterday I noticed the frequency would be stuck at 0.22 GHZ (yes, that’s 220 MHz) at all times, even when starting the web browser and loading long web pages. It was very slow, and I had a a few “windows not responding” in the process.

I checked the metal box temperature with an IR thermometer and got 46 C, which did not seem that high. I had added some black tape a few hours ago, or the case was a bit reflective leading to lower temperature measurements.

Nevertheless it was late, so I started the computer again the following day, and it was responsive, with an even higher SSD read speed as last night (~400MB/s). So I launched 3DMark benchmark, and the results were disappointing to say the least, as they were much lower than the scores I got with MeLE PCG01 Atom Z3735F Bay Trail mini PC. I’m a linux user, and I’m not that familiar with Windows, so after some Google, I found that HWiNFO would do the job checking out the temperature and throttling. 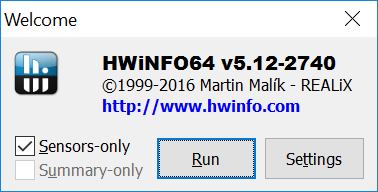 Once you start the application, select “Sensors-only” and click “Run”.

And the program gave me the confirmation that all four cores of the processor were severely over-heating, and subject to thermal throttling.

MINIX NGC-1 is the computer with this behavior, but luckily it is not shipping to end-users yet, only to reviewers, so hopefully the company can find a solution before launching the products. It’s also possible I received a defective sample, and we’ll have to see what the few others bloggers with the device will experience. My room temperature is 24 to 30 C during the day, so it could have an impact too, but normally products are tested in ovens at set temperatures. Anyway, it will be interesting to find out how this get resolved.

I’m obviously postponing the review, since when thermal throttling kicks in, the mini PC’s performance and user experience are about equivalent to the ones of the Raspberry Pi model 1 when it was released in 2012…

Sounds like a defective unit. I’m running Core i5 5250u fan-less mini pc as my main desktop and get normal operating temperatures of 42-45oC. It’s one of those mini pc with a metal casing that acts as a heat sink. Also got a i7 4785T in a fan-less case, which reaches about 50oC normal work load or about 60 when playing back movies – it’s used as media pc mainly. Both these mini pcs run really hot and throttle when a game is run over a period of time. Don’t expect to N3150 to run anywhere as hot as what… Read more »

I can’t belive they don’t seen this issue with theire own tests ….

It’s the main issue for ALL box … according to the announced saling price, it should be throtling-free :/.

Did they forget thermal paste ? x)

@Paulin ARBOUX
Maybe the heatsink has bad contact with the processor. I just need to find a way to open it.

Hello I’m Paolo Smedile from PcExpert Blog.
That’s what I had to do to throttling the cpu. It took about 9 minutes.
No problems during normal usage.

@PcExpert
Thanks for the update. MINIX plans to replace the sample I have now with another one, and investigate what may have gone wrong.

do not stress daself; open the case carefully and glue an small coller on cpu unit, mine was completeley loose when i opened it.., was hanging there between casing and motherboard.. had same issues on mine..

cnxsoft : @PcExpert Thanks for the update. MINIX plans to replace the sample I have now with another one, and investigate what may have gone wrong. Did you get a replacement & did Minix find what was the problem. Was thinking of getting one of these myself but have been put off by problems other people seem to be having ? Some problems which were reported were. Booting into command prompt & when fixed came back again later. Freezing for no reason after many hours of use. Slow to respond to Bluetooth mouse & keyboard. Some thought the metal case… Read more »

The issue with my first box:

The unit you returned, has one screw not being installed properly, resulting poor contact of the heatsink with the CPU -> throttling.

@Jean-Luc Aufranc (CNXSoft)
Cheers for that.
I will look at your review.
Thanks.
Tony.

Thanks for putting me onto HWINFO64. Been wondering why my PC had been running slow over the last 6-9 months and the fans were all working extra hard (and noisily). HWINFO said all the cores were working at 96 deg C and above and Core 0 was being throttled back b/c it was at 99 deg C. Opened up the PC tower, vacuumed all the dust, used a can of compressed air to blow out all the fins in the CPU heatsink and connected everything up and restarted. Everything is running at around 50 deg C and the machine is… Read more »

i did not even know such windowsapp exist! very good review