It can be pretty useful to monitor the CPU load, memory and storage usage, and network traffic of your boards, and they are already graphical tools like System Monitor on Ubuntu providing most of the information, and monit can be used on server, but I’ve recently been introduced to RPi-Monitor utility for Raspberry Pi and Orange Pi boards (patched version), that very easy to install, and provide neat chart of many different variables.

Since I’m currently playing with Orange Pi One board running armbian, so that’s the platform I’ve used to run RPi-Monitor (OPi-Monitor). The usage should be exactly the same on Raspberry Pi, but the installation steps are little different.

To install RPi-Monitor on Orange Pi One, open a terminal or access the serial console, and you can install and start the service with a single command line:

It actually took around 8 minutes on my board, as it downloaded and installed required packages. Once the installation is complete redirect your computer browser to the URL provided at the end of the script to access the web interface. 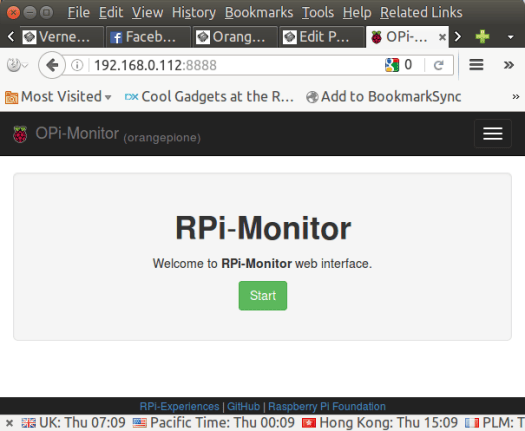 That’s all good, but my favorite part is the Statistics tab with show really neat and useful charts.

They may be confusing at first since two scales are used for multiple elements,  with for example the left sacle (0 to 100) showing CPU usage in percent and SoC temperature, with the left scale (0 to 5) used for the other metrics such as CPU frequency in GHz, Active CPUs, etc… Each element can be easily disabled and enabled.

There are 7 types of charts: Uptime, Load / Clock speeds / Temperature, Details CPU Stats, Memory. Disks – boot, Disks – root, and Network, and 6 update options with the fastest being updated every 10 seconds for a 24 hour window, and the slowest every 60 minutes for a one year view of the board. The Options tab is only used to select the default update time, and you can also access the charts in your smartphone’s browser by scanning the QR core in the About section.

I’ve run sysbench to show the chart in action, and at first I was confused simply because the charts are not updated in real-time, and you need to reload the page to get the latest available data. There are two windows in the Statistics tab with the large one allowing you to zoom-in a specific time period out of the 24-hour window using your mouse, and the smaller one always shows the 24-hour charts (or whatever update time you have selected). The Reset selection clear the zoom in the larger chart. 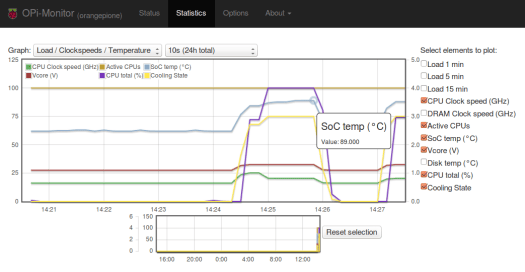 I’ve run sysbench twice on the chart above, checking the value as the second test was running.  What we can see is that as CPU usage climbed to 100%, the CPU temperature raised to 89.0C, which triggered various cooling states of the processor, leading to drops in the CPU frequency as the test was running. That means for this type of load the board would likely benefit from a heatsink and/or fan to operate at a higher performance level.

RPi-monitor is open source  and you can get the source code and/or report issues on Raspberry Pi boards in github. You can get more info and updates on the developer’s blog.

Beware: The ‘installers’ only work on Debian based distros, more templates will follow and in Armbian all supported boards will be monitoring enabled soon (either using RPi-Monitor, SNMP or any other solution since we will provide all the different monitoring sources for the individual boards/kernels in one place: below /etc/armbianmonitor/datasources/)

A couple of (soon to be) overstressed RPi’s here appreciate that piece of monitoring sw ; ) Thanks, TKaiser.

@blu
You should better thank Xavier Berger (unfortunately no credits in Jean-Luc’s blog post) for this piece of wonderful (and lightweight!) software. I just added some templates/daemons for other SoCs so that RPi-Monitor is useable there too. I learned quite a lot the last years staring at graphs and trying to do ‘active’ benchmarking. 🙂

Netdata is another web based remote monitoring tool -> https://github.com/firehol/netdata/wiki
It should have a different purpose though. I don’t see anything about temperature, active CPU cores, and so on. It’s more a server monitoring tool.

How can I install on dietpi with debian ? I try it wit rpimonitor, but template for h3 failed…temperature not show valid data value etc…os: dietpi

How do you get the Load / Clockspeeds / Temperature graph? That is not available in my dropdown, running on a rock64

You would need to write your templates to support the various information sources RK3328 kernel exposes. I’ve not done this in the meantime since I kinda lost interest in RPi-Monitor and focused on armbianmonitor’s CLI monitoring instead since while showing ugly output providing more insights that are useful especially on SBC: https://forum.armbian.com/topic/7727-gotop/?tab=comments#comment-58269

If you run a Linux image from ayufan on your Rock64 ‘armbianmonitor -m’ will work similar or even identical.

As I understand Scratch 3 requires Adobe flash, so it may be tricky. I can see there’s a version for Raspberry Pi that does not require Chrome. That would be a better question for the Armbian forum, if you have not asked over there already.