Orange Pi One board is the most cost-effective development board available on the market today, so I decided to purchase one sample on Aliexpress to try out the firmware, which has not always been perfect simply because Shenzhen Xunlong focuses on hardware design and manufacturing, and spends little time on software development to keep costs low, so the latter mostly relies on the community. Recently, armbian has become popular operating systems for Linux ARM platform in recent months, so I’ve decided to write a getting started guide for Orange Pi One using a Debian Desktop image released by armbian community.

But let’s start by checking out what I received. The Orange Pi One board is kept in an anti-static bag, and comes with a Regulatory Compliance and Safety Information sheet, but no guide, as instead the company simply asks users to visit www.orangepi.org to access information to use their boards.

The top of the board have the most interesting bits with Ethernet, micro USB and USB ports, HDMI port, micro SD slot, power jack, a power button, the 40-pin “Raspberry Pi” compatible header, Allwinner H3 processor and one Samsung RAM chip. The 3-pin serial console header can be found right next (under in the pic) to the RJ45 jack.

The bottom of the board features another Samsung RAM chip (512MB in total), and the camera interface.

Installing and Setting Up Armbian on Orange Pi One

While the company claims your can download firmware on Orange Pi Download page, they have not published a firmware image specifically for Orange Pi One, and while you could probably use an Orange Pi PC image (this may mess up with regulator), I’ve never heard anyone ever praise Shenzhen Xunlong for the quality of the images they’ve released, quite the contrary.  While Orange Pi community member Loboris released several images for Allwinner H3 boards, he does not seem to have updated them for Orange Pi One, and I’ve heard a lot about armbian distribution recently based on Debian and targeting ARM Linux boards, so that’s the image I’m going to try.

You can currently download Debian Jessie server or desktop based on Linux 3.4 legacy kernel, but once the Ethernet driver gets into Linux mainline (aka Vanilla), you’ll be able to run the latest Linux mainline on Orange Pi One, at least for headless operation.

First you’ll need to get yourself a 8GB or greater micro SD card preferably with good performance (Class 10 or better), and use a Windows, Mac OS and Linux computer to download and flash the firmware image.

I’ve done so in Ubuntu 14.04. Once you insert the micro SD card into the computer, you may want to located the SD card with lsblk:

I used a 32GB class 10 micro SD card, and in my case the device is /dev/sdb. I’m going to use the command line, but you can use ImageWriter for Ubuntu or Windows, as well as some other tools for Mac OS. Let’s download the firmware, extract it, and flash it to the micro SD card (replace /dev/sdX by your own device):

Now insert the micro SD card into Orange Pi One, and connect all necessary cables and accessories. I connected HDMI and Ethernet cables, a RF dongle for an air mouse, a USB OTG adapter for a USB flash drive, the serial debug board, and the power supply. Please note that the micro USB port cannot be used to power the board, so you’ll either need to purchase the power adapter, or an inexpensive USB to 4.0/1.7mm power jack adapter to use with a 5V/2A USB power adapter. 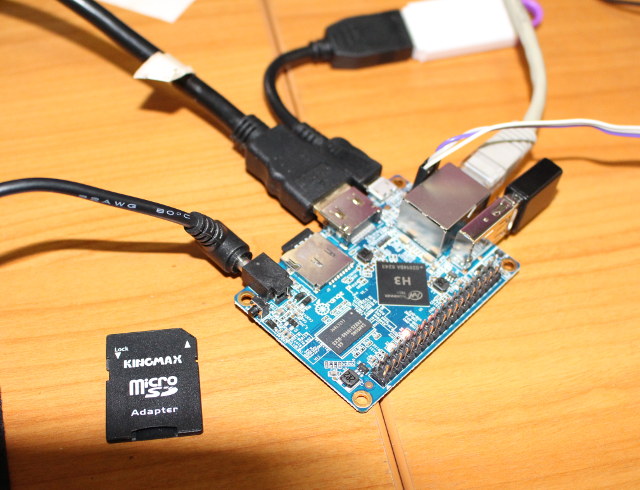 As you connect the power supply, the red LED should lit, and after a few seconds, you should see the kernel log on the HDMI TV or monitor. I also access the serial console via a UART debug board, but it will only show the very beginning, and once the framebuffer is setup most message are redirected to the monitor. This is what I got for the first boot in the serial console:

But I got many error messages on the TV reading “[cpu_freq] ERR: set cpu frequency top 1296MHz failed!”. Those are actually normal because a single firmware image is used for all Orange Pi Allwinner H3 boards, and they use different regulators. The message will disappear subsequently once the system will have detected an Orange Pi One. 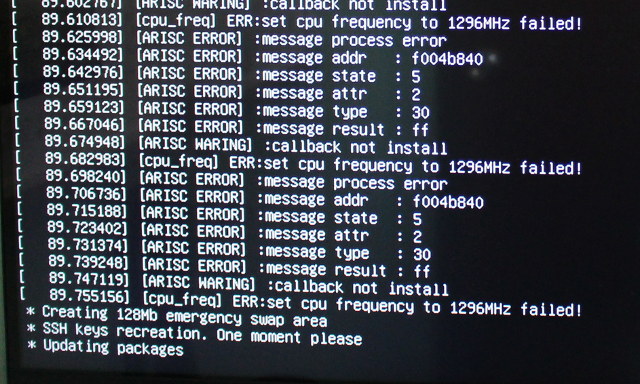 You may have to be patient the first few minutes of the very first boot (2 to 3 minutes) as you see the error messages above looping seemingly forever, as the system is resizing the root file system partition, creating a 128Mb emergency swap area, creating the SSH key, and updating some packages. Once this is all done, the system will reboot, and you’ll be asked to change the root password, create a new user, and adjust the resolution with h3disp utility which will automatically patch script.bin file in the FAT32 boot partition of your micro SD card. The default credentials are root with password 1234.

H3disp utility allows you to choosen the resolution and refresh rate of your system, and I select 1080p50, and rebooted the board one last time, and after about 20 seconds, I could get to the Debian XFCE desktop.

The resolution of the desktop is indeed 1920×1080, Ethernet is working, but my keyboard layout does not match as the default layout is for Slovenian language. I went to Settings->Keyboard to change that. 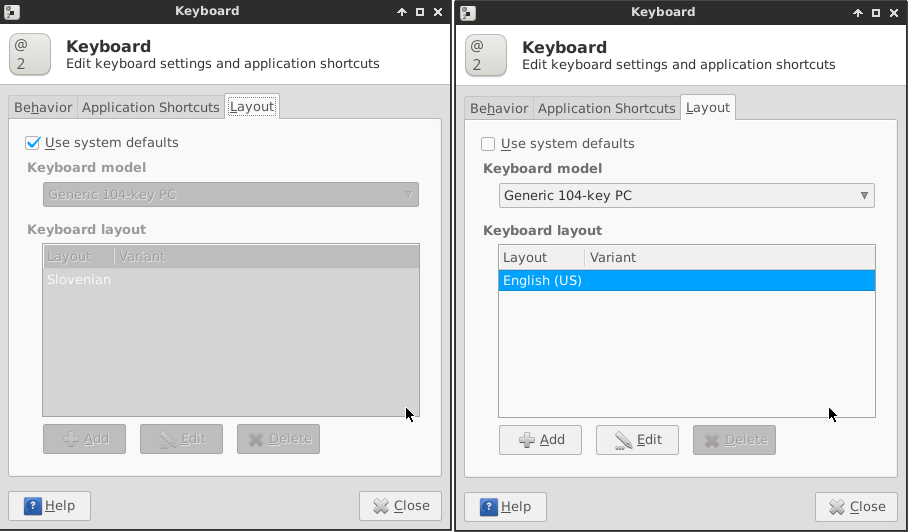 And it seemed to work randomly as I sometimes got a QWERTY keyboard, but other times it would revert to a QWERTZ keyboard, and I’m not sure why. Following the instructions on armbian documentation using:

did not completely solve my issue either at first, but it seems to be fine now…

I’ve also noticed some permissions issues starting with the network which requires sudo for ping and iperf, and likely to CONFIG_ANDROID_PARANOID setting in the kernel configuration. My USB flash drive was also not automatically mounted, and I had to use the sudo to mount the drive manually too.

Most people will also likely need to change the timezone with: 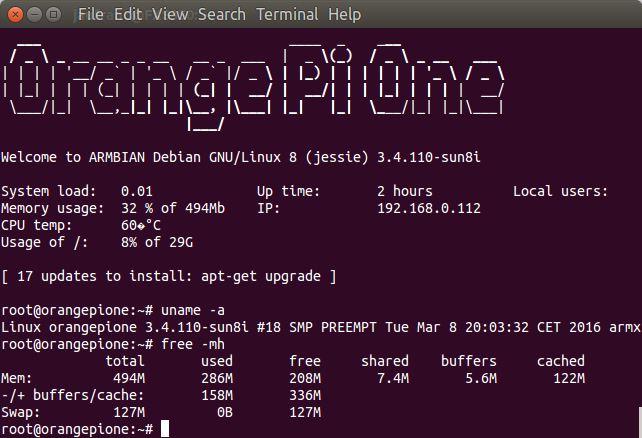 Let’s check some parameters with the command line:

The system is running sunxi Linux 3.4.110 kernel, and Debian 8. The processor max frequency is set to 1.2 GHz as it should be, the GPIOs appear to be supported just like in Orange Pi 2 mini (but less I/Os are shown), total RAM is 494MB, and 2.1GB is used out of the 29GB root partition in the micro SD card. I know some ARM boards can’t be powered off properly, but it’s not the case with Orange Pi One as I could turn it off cleanly with the power LED turning off at the end of the shutdown process.

That’s all for this guide, and I’ll showcase 3D graphics and video hardware decoding in a separate post (Update: the post is up). You can get further by checking out Armbian Orange Pi One page, following the instructions to build your own Armbian image, and browsing Orange Pi One thread in armbian forums.