3D printers for the home usually cost between few hundred dollars to several thousands depending on the model, but OLO 3D Inc. has created a $99 3D printer that prints objects using your smartphone screen and photopolymers (aka daylight resins) that harden with light. 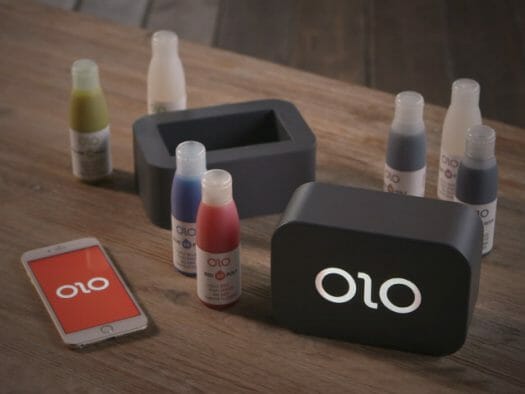 The printer itself is divided into two main zones: the bottom printing chamber where you’ll pour the liquid resin, and the top with the motor and four AA batteries that power the device.

You’ll first need to install OLO 3D Android or iOS app in your phone, load a 3D object either from a library, created with 3D software, or scanned with apps such as Autodesk 123D Catch, set your phone in airplane mode with WiFi disabled, connect it to the power adapter, place it in a bed at the bottom of OLO printer, and tap on print. Now place the printer bed and printing chamber, and pour your selected resin that comes in various colors, and hard or flexible material type, and finally place the top cover in order to start printing. You’ll need to be patient as it takes about 46 minutes to print a 1 cm object, and close to 2 hours for a one inch object using an iPhone 6. Accuracy and speed will depend on your phone resolution, brightness and contrast. Once the print is completed, you can clean it up with warm water, and you may want to leave it cure under sunlight. You can put the remaining resin back into the bottle. The resin bottles will actually be black, as the resin must be protected from ambient light.

The Kickstarter camnpaign went viral, and with 22 days to go, OLO has raised 1.3 million dollars blasting through the $80,000 funding target. OLO 3D printer can now be had for $99 with a white resin bottle. A bottle of resin will typical cost around $15, and printing a small object cost around $1 in resin. Since Kickstarter is limited to one pledge, you’ll be able to order more resin on BackerKit later on. Shipping adds $29 to most countries, except for some reasons (likely a mistake) to some countries such as Brazil, Thailand, and Saudi Arabia. Delivery is scheduled for September 2016 to the US, and October 2016 to the rest of the world.

Does this mean I can’t use my phone for at least 4 hours?
No thanks.

@dommels
@haze
Yes, it’s silent too, so no problem with noise.
Another options would be to use an older smartphone that you don’t use anymore. It can’t be too old though, as a lower resolution screen would impact the print quality.

Seems like bad decision to use a phone – how much does a monochrome LED display without a touchscreen cost these days?

@onebir
One idea is that you can share design through your phone too. So you can send a design or “gift” to your friend to be 3D printed. So this could still have been implemented in the 3D printer, but with monochrome display + USB or Wireless connectivity they would not have been able to hit their $99 target price.

Sounds like a toy.. Better to spend more money and get a normal 3d printer. There’s also a significant size limit. The idea sounds great, but I doubt it is too great in real life

OK using the smartphone might not be the best idea … although everybody (more or less) has a smartphone. Furthermore it seem to take ages to print something. Still, I find the process pretty STUNNING. It is my idea of science-fiction : a 3D stuff comes out of a 2D stuff. Maybe I mised a major advance in 3D printing (which is likely), but I did not see a similar 3D printing process before.
Right I wasn’t born during the last rainfall so I might badly outdated when it comes to science-fiction.

Amazing how innovative people can get. Always love 1 Apr

Light sensitive resin printing is great* but what are the low cost PLA/ABS filament printing options? Only one I know of under $300 id Creality CR7 (~$250)…

*But might be faster with a laser providing the light? Sounds like a job for an old DVD drive!