Intel unveiled five new Compute Sticks for 2016, with two Cherry Trail models, and three Skylake Core M models namely STK2M3W64CC and STK2MV64CC based on Intel Core m3-6Y30 processor, as well as STK2MV64CC with a more powerful Core m5-6Y57 vPRO processor. Ian Morrison (Linuxium) managed to get an early sample of STK2M3W64CC running Windows 10 on 4GB RAM and 64GB storage, and posted some benchmarks, as well as results of his experimentations with Ubuntu and Chrome OS in the Intel section of G+ MINI PCs community and his own website. 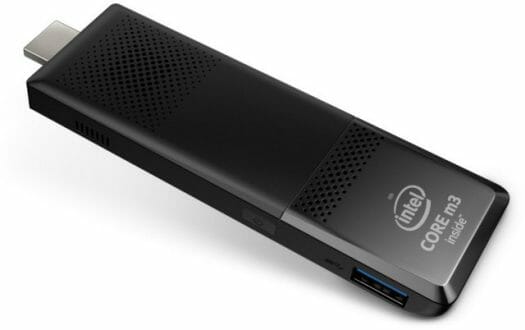 He started by running some standard benchmarks in Windows 10 including CrystalDiskMark (storage performance), Passmark8, and 3DMark, and while the storage performance is underwhelming, the processor is clearly and noticeably faster than Braswell, and Cherry Trail processors in terms of CPU and GPU performance based on comparisons with  Tronsmart Ara X5 (x5-Z8300), Kangaroo Mobile Desktop (x5-Z8500), Voyo V3 (x7-Z8700), and Intel Braswell based  Intel NUC5CPYB/H NUC, and MINIX NGC-1.

The results of 3DMark Ice Storm 1.2 benchmark were divided by 20 for a more readable chart.

He also booted Ubuntu 16.04 daily build from micro SD card and an ISO image from Windows 10, and everything worked, including WiFi and HDMI audio, contrary to lower cost platforms. Chromium OS could also be booted from an ISO located in the eMMC in the Windows 10 partition.

Ian also gave an historical perspective of the progress made since the first HDMI TV stick (MK802) launched four years ago, by comparing the Phoronix benchmarks in Ubuntu 12.04 for MK802+ (Allwinner A10 Cortex A8 processor) and Ubuntu 16.04 for the latest Intel Compute Stick. 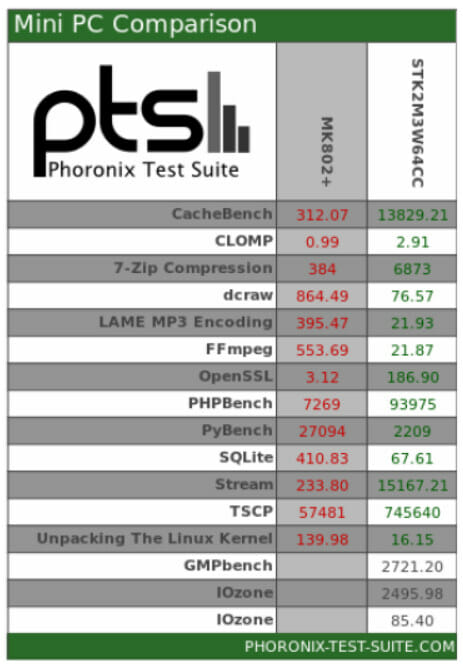 Most results show at least 10 times more performance, and some up to 60 times faster (OpenSSL may use some hardware acceleration in the Intel platform), but  nobody should be surprised that a $399 device in 2016 performs way better than a $70 in 2012.

You can see how Ubuntu 16.04 performs in STK2M3W64CC – especially app loading times – in the video below.

Finally we can make a conclusion, low cost Intel chip especially Atom-based could not run graphical distribution linux out of the box. We need to pay more up to Labtop/Desktop price tag.

Wow, the price is just horrible. who would want to buy that..? Should be sub $200 at least

Full review @ http://www.linuxium.com.au/reviews/stk2m3w64cc
He also tested Android. Antutu 6.0 score: ~127,000 points, so the performance according to that benchmark is about the same as an high-end Android phone.