BQ Aquaris M10 Ubuntu Edition tablets were unveiled at Mobile World Congress last month, and were touted as the first Ubuntu devices supporting convergence. The two versions of the tablet are now up for pre-order. 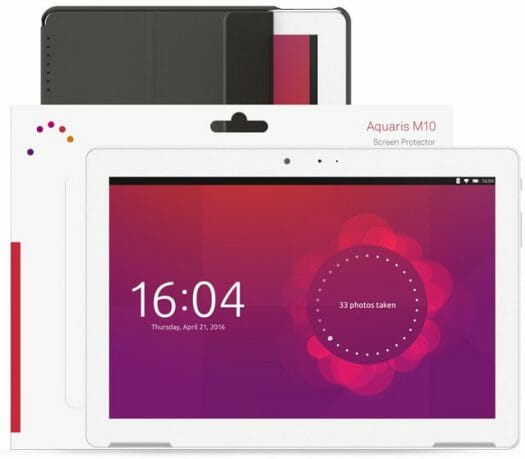 The specs between the Android and Ubuntu versions appear to be exactly the same, so it looks like the price difference is because of the operating systems. The Ubuntu versions also have a free cover and protector screen, but I don’t think it’s enough to explain the price difference. The price will also vary depending on the countries. For example, French people have the “privilege” of paying around 10 Euros extra for a “copy” tax, and a few Euros cents on top for an Eco tax.

The Ubuntu tablets will ship the second week of April with Ubuntu 15.04, but they should soon get Ubuntu 16.04 update once the Xerus Xenial is released at the end of April.

@Sander
All are reasonable explanations.

@Sander
But economy-of-scale cannot possibly be a factor – it should be the exact same hw as the android flavor, no?

I’m torn whether to get one or not. I’m in need of a new coding netbook, and this could perfectly cover my needs (huge battery, expandable storage, solid build quality, aarch64), except for the 2GB ram – that means no -j4 (more often than not).

I am not sure but there is still no Mali 3d hardware acceleration so still works of cpu?

Implementing (and supporting) an OS (Android resp Ubuntu Mobile) on HW takes time and thus money. If you can ‘spread’ those costs across 100.000 resp 1.000 devices makes a big difference. So economy-of-scale is involved.

@Sander
Right, I was thinking of BOM alone.

Maybe shipping is also impacting the price.. since the Ubuntu Edition tables are launched globally with shipping included, while I checked the Android version price on the Spanish website.