The original Kangaroo Mobile Desktop PC came with an Intel Atom x5-Z8500 processor, 2GB RAM, and 32GB flash, as well as a small dock to add HDMI, two USB ports, and DC input. The company also launched an upgraded “Plus” version with 4GB RAM and 64GB flash a few months ago, but now they have introduced the Pro version with the same CPU “module”, but a larger dock, making the device over twice as thick by adding a 2.5″ SATA bay, Ethernet, VGA, etc… 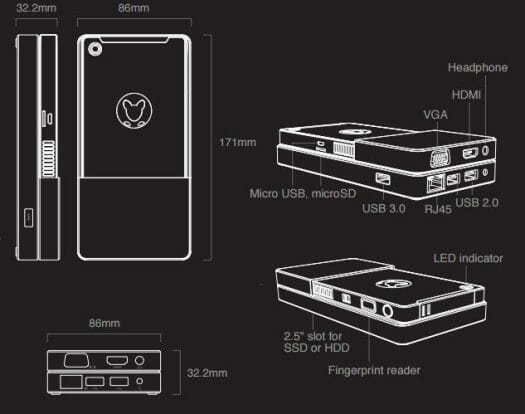 The mini PC runs Windows 10 Home, and ships with a power adapter and power cord.

InFocus Kangaroo Pro can be purchased now on Newegg for $199.99. If you already own a Kangaroo Mobile Desktop, in theory you should be able to replace the small dock with the bigger dock, but sadly the company does not appear to sell the Pro Dock separately, or just not yet.

Yet another USB2.0 to SATA bridge?

@onebir
This needs to be tested. For example, Voyo V3 (x7-Z8700) has a PCIe to SATA bridge with very good performance.
The first Kangaroo had several reviews in the US, so I’m sure this one will be tested too.

Ok – so unclear from the existing specs?

@onebir
Actually since they are using a 40-pin proprietary connector for their dock, there may not be enough pins for PCIe, so USB might be more likely.