MaruOS is an operating system combining Android and Debian Linux that – until recently – was developed by a single developer for Qualcomm Snapdragon 800 (ARM) based Nexus 5 smartphones, and use Android on the go, while switching to Debian when the phone is connected to a larger display and a keyboard and mouse. It turns out Intel had the same idea, and they worked on an Intel Atom x5 smartphone with 2GB RAM running both Android Lollipop in mobile mode, and Debian Linux as desktop mode when connected to a keyboard dock. Intel does not talk about convergence, but instead calls it “Big Screen Experience”. 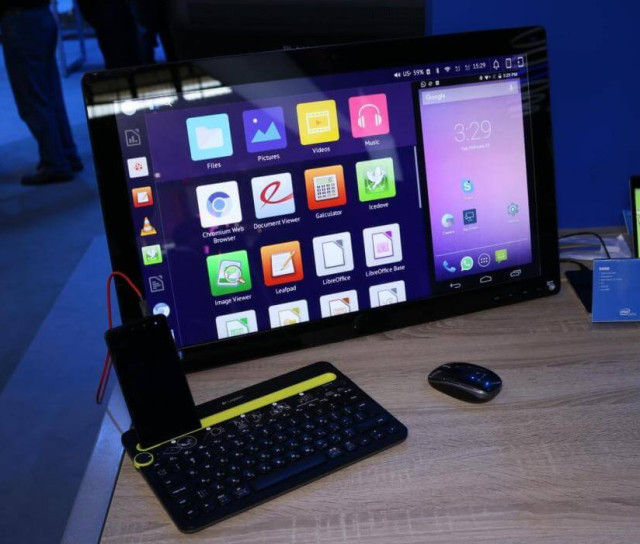 Based on the picture above taken by WinFutures.de at Mobile World Congress 2016, it appears you can also display both Debian and Android operating systems side-by-side if you wish to. They’ve also shot a video (in German) showing the smartphone run Android, and after switching to Debian, you’ll see VLC playing a video running at the same time as LibreOffice, Chrome and Firefox web browsers, all in they separate windows, and doing a relatively decent job at it considering the device’s low-end processor.

The phone itself is a prototype powered by an Intel Atom x3 processor coupled 2GB RAM and 16GB flash, and featuring a 5.5″ display (720p), and MHL support to connect the phone to an HDMI display. The solution would sell for about $100, and Intel might not have used higher end Intel smartphone platforms since those are also running Windows 10 Continuum… While the phone currently runs Android 5.1.1 Lollipop, it should soon support Android 6.0 Marshmallow, and together with Debian share the same Linux kernel and file system. The phone’s display currently turns off when the external display is attached, but a new version of Atom X3 will support dual displays.

While technically speaking the solution is ready, The Register reports that so far no manufacturer has committed to bring the solution to market, but this could change soon since Intel is talking to prospective customers a MWC 2016.