Since Intel has decided not to officially support Bay Trail and Cherry Trail processors in Linux, and focus on other priorities, people who have tried to use HDMI audio in Linux with mini PCs or TV sticks based on the processors have always had issues. There’s a workaround for Bay Trail mini PCs with Linux 3.16 kernel, but so far I’ve never seen a Cherry Trail system working with HDMI audio in Linux. Luckily, Pierre-Louis Bossart has been working on support, and Piotr kasprzak has tried HDMI audio support with OpenELEC 7.0 and a patched Linux Kernel 4.5.1, and confirmed it to be working on Tronsmart Ara X5 Plus and Wintel 10 Pro mini PC powered by Intel Atom x5-Z8300 processor. 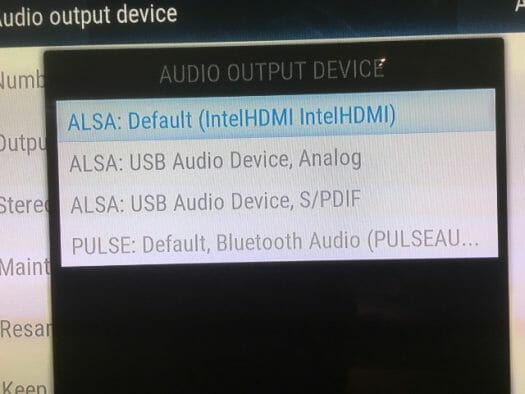 This can also be verified in the kernel log with dmesg:

If you want to try it yourself, you can download the OpenELEC image with the modifications. If you want to build your own Linux kernel with HDMI audio support apply this patch to Linux 4.5, and enable CONFIG_SUPPORT_HDMI=y in the kernel config.

Thanks to Piotr for the info!

Great! Waiting for this for months 🙂

Yes, my x5-Z8300 Board is no longer silent. Thanks to Pierre-Louis Bossart!

this work for baytrail on linux 4.5 ?

in the patch i see nothing specific to skylake

baoboa :
this work for baytrail on linux 4.5 ?
in the patch i see nothing specific to skylake

Argh !! time out during editing

i was meaning cherrytrail not skylake

and i see that in the patch

” Add header files for interface available on Baytrail and CherryTrail “

Yes 😉 it works!!! But if you will play some 4k movies from Network buy 1gbps Network lan card on usb 3.0

if think there is a line missing in the patch , the last diff is adding 16 lines, but 15 are shown
by addidng an additional empty line
“+”
i was able to patch my kernel (4.5.1)

Just tried OpenELEC image (had to add a grub 32 UEFI boot file) to check if the patch worked on Acer Switch 10 (mod. SW05-12) based on Atom Z3735F SoC.
I haven’t found any error/warning in dmesg complaining about missing/wrong firmware, but the result is the usual one: NO alsa soundcard and mute system.
I couldn’t get any success also with the old linuxium patch targeted at baytrail SoCs.
Perhaps, this Acer stuff suffers of a bad DSDT but I can’t figure out how to patch it.
GC

@GunterO
But I understand that code is also supposed to work on Bay Trail.

@gencap
there is a new linux config “CONFIG_SUPPORT_HDMI”
did you add it to your config-local when building the kernel ?

@baoboa: I haven’t recompiled my own kernel; I’ve just downloaded the ^^^ OpenELEC image and added a bootia32.efi to make my Acer Switch 10 boot.

My previous attempts always ended up with errors/warnings complaining about intel’s firmware or the particular codec (ALC5640) fitted in my 2-in-1.

Could this workaround be backported to the kernel used by a recent Android-x86 distro?

gencap : Just tried OpenELEC image (had to add a grub 32 UEFI boot file) to check if the patch worked on Acer Switch 10 (mod. SW05-12) based on Atom Z3735F SoC. I haven’t found any error/warning in dmesg complaining about missing/wrong firmware, but the result is the usual one: NO alsa soundcard and mute system. I couldn’t get any success also with the old linuxium patch targeted at baytrail SoCs. Perhaps, this Acer stuff suffers of a bad DSDT but I can’t figure out how to patch it. GC Could you send me your modified image? Also, could you… Read more »

i will try make special image also for Bay trail 😉

@gencap im also on Wintel 10 Pro booting from grub becuase of UEFI32bit – did you maybe figureout where put or store grub.cfg for read by gurb2 automatical ?? i must always write manual boot sequence 🙁

piotrasd :
https://www.sendspace.com/file/o63gqg – OpenELEC-Generic.x86_64-6.0.398-Intel_EGL based on source MattDevo + HDMI sound patch
about Asus T100 i have new patches for latets kernel i could make test build

Thanks, will try it later on my Pipo X7S (has a Z3637F). Please, could you point me how to easily do it myself as I want to test Lakka too?

for anyone who want boot openelec with UEFI32 bios, please download
https://github.com/hirotakaster/baytail-bootia32.efi/raw/master/bootia32.efi and put to folder on USB flash in folder
/EFI/BOOT after that from EFI shell tap “fs0:” next when grub will loaded tap

set root=(hd0,gpt1)
linux /KERNEL boot=/dev/sda1 disk=/dev/sda2 ssh (if you want install on memory inside device put on the end of line “installer”)
and on next line
write boot and tap ENTER

Does this patch support bitstreaming/passthrough of DTS/AC3? How about HD audio DTS-HD MA or Dolby TrueHD?

not yet – there is no HDaudio in SoC and only 24bit, sound for passthrough is needed 16bit but developers looks solution how this resolve in other way ….

@Mat, @piotrasd:
I’ve copied “bootia32.efi” from an old “parted magic” distro, but I just booted manually to test if HDMI audio was working, so I didn’t manage to build a permanent grub.cfg.
Actually, on my Aspire Switch 10, I use rEFInd to triple-boot Windows 8.1, Android-x86 KitKat (missing audio and some “secondary” hardware support) and that handy pmagic mini-distro.
I had to shrink the default recovery+wimboot partition to make room (~2GB) for an ext4 partition (/dev/mmcblk0p4) holding both android and pmagic.

Does it mean that it will work on Minix z64 (baytrail z3735f)?
In the past, have managed to install OE6 , but HDMI has not worked.

@Eli Landes
In theory it should. But you may have to read the other comments above to get it working.

HI I installed the image to my new Tronsmart ara x5 plus but for some reason after using it for 20-30 min it will automatically reboot I have tried fresh install and same result.

Can someone pease help me.

has anyone else experienced this?

I don’t think it is related to OpenELEC.
The Tronsmart Ara X5 has a bad track record of issues like you have, but this is supposed to been fixed in the “Plus” (read: debugged version). Do you have the latest BIOS installed?
Maybe you can find help on their forum: http://forum.tronsmart.com/forum/mini-pc#.V0_RyJF96Hs

will this hdmi sound patch be included into the official openelec releases soon? (also uefi boot and so on)
(just worried to lose it again when updating/upgrading)

I have the wintel CX-W8 pro with cherry trail x5 z8300 bord, i have no sound in Windows 10 , i have install the openelec 7 on usb drive wel finally it works. But can i get sound also in kodibuntu ??

I installed on wintel pro and sound is gteat however the kodi seems locked there is no openelec program and no way to add skins or addons even after enabling addons in the settings. anyway to downgrade to a stable build

Is there a stable version with the hdmi patch and the c-state fix for Cherrytrail and Baytrail?

Works on Intel Compute Stick Gen 2 z8300 Just need it with an updated Kodi version or in a Jarvis build. Please let us know if updates are available would like to some add-ons and skins.

@ScottyP
If you need a more recent image, you can check LibreELEC 8 @ http://www.cnx-software.com/2016/09/19/libreelec-8-for-intel-atom-bay-trail-and-cherry-trail-devices-with-32-bit-uefi-binary/

I am dying to get the latest working Linux Distro OpenElec or any other that works out of the box with sound and proper video for my Wintel PRO Cherrytrail atom processor can you guide me to where I can get latest iso? I will use Rufus of windows laptop to create bootable usb. I currently have linux Ubuntu on it but it is missing drivers. I be more than happy to buy you a cup of cafe.