After reviewing Tronsmart Ara X5 with Windows 10, I decided to give a try at Ubuntu. Initially I downloaded Ubuntu 15.04 Desktop 64-bit ISO image, and prepare a bootable USB drive with UNetbootin in my computer running Ubuntu 14.04. But after inserting the USB flash drive into Ara X5, and pressing F7, there was no options to select the drive, so I went to UEFI settings, and the drive was clearly detected, but not available as a bootable device. 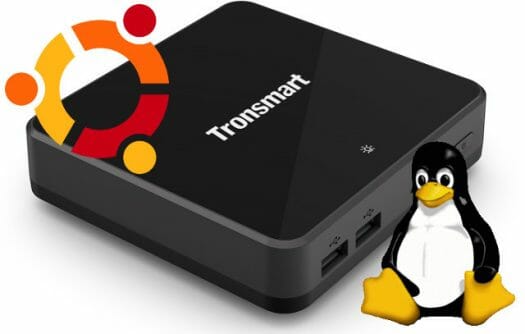 Finally, having heard one company booted Ubuntu on MeegoPad T04 using Rufus, and Tronsmart confirming Ubuntu 14.04 could boot on Ara X5 using Pendrive Linux USB installer, I decided to try again with Windows tools, and prepared an Ubuntu 15.04 image with Rufus. Great! Pressing F7 would show the USB flash drive, and I could boot Ubuntu 15.04.

But unfortunately audio output is not working (only Dummy output), nor is WiFi on the platform. These were the exact same problems found on Intel Atom Bay Trail (Z3735F/Z3736F) mini PCs at the beginning, until a fix was made for audio output. Since then there has been several images released for such platforms, but several steps were usually required, until Ian Morrison (Linuxium) released a simple-to-use Ubuntu 14.04.3 LTS image, especially with 64-bit UEFI, which is exactly what we’ve got on Tronsmart Ara X5.

Once this bootable USB drive was ready, I inserted it into Ara X5, and pressed F7 repeatedly, but even after waiting one minute I only got a black screen. So I booted Windows 10 first, insert the USB drive, clicked on Reboot, and pressed F7, and I could boot with the USB drive… sort of. I could see some kernel log on the HDMI TV, followed by the Ubuntu animation, and eventually it stuck there. I checked the drive for errors, and tried again, but it ended with a black screen.

So I went back to Ubuntu 15.04 AMD64 downloaded from Canonical website, and inserted a USB audio card, as I wanted to play 4K video @ 30 fps in Kodi Linux at 3840×2160 resolution, something that did not work very well in Windows 10.

As you can see on the picture above, the good news is that I could switch to 3840×2160 resolution in Ubuntu, and I could also hear audio via a cheap USB sound card connected to stereo speakers while playing a YouTube video. However, the system really struggled at that resolution, even moving windows around was pretty difficult, and ultimately it hanged. I tried that twice with the same results, so instead of taking a screenshot as originally planned, I took a picture, and needless to say I decided to give up on Kodi too.

Thanks for testing this, hopefully these issues will be addressed at some point.

I wonder if Xubuntu 15.04 would work better? It’s based on Ubuntu 15.04 but uses the Xfce desktop instead of Unity so I think it’s “leaner” running.

@Brad
That’s one way, but another solution is probably to keep using 1080p on this platform, and not go to 2160p even if it is somewhat supported.

Kernel patches now exist for what I think was your audio problem for Linux kernel versions 3.19 and 4.3 if I remember correctly – for this Realtek audio device rt5640. But you have to apply them yourself. I think they are in a 4.3 release candidate RC3. Google for “rt5640: fix line out no sound issue”

Looks like that audio fix is in this 3.16 Kernel update…

Did you run Linux off the USB drive, or did you install it onto the eMMC Flash memory? (effectively replacing the windows os with linux)?

@Dave
Off the USB drive.

Has anyone tried this again subsequently? I’ve got one of these and it’s a lovely piece of hardware. However, it is very unstable on Windows 10 thanks to ropey drivers (2-3 blue screens a day pointing to driver IRQL errors). I’d love to get it working on Linux, in particularly on Ubuntu as I suspect it would be far more stable.

I’ve been trying with an Ubuntu 16.04 LTS flash drive formatted with Rufus, and there are still problems with random hangs after reboot. Seems like a driver issue, but I haven’t been able to nail down the culprit.

@Magendanz
I’ve read reports that Linux 4.x is not that stable on Cherry Trail processors.
I tried on MeLE PCG02U and I noticed some issues too that seemed to disappear when disabling WiFi. -> http://www.cnx-software.com/2016/05/26/updating-star-cloud-pcg02u-to-ubuntu-16-04-with-wifi-and-hdmi-audio-support/

Seeing that this minipc has a x5 atom the question is does intel provide the driver in ubuntu? That could make a difference