Tronsmart Ara X5 was one of the first Intel Atom Cherry Trail mini PCs to launch on the market. It came with an Intel Atom x5-Z8300, and the now typical 2GB RAM combined with 32GB flash. But in my review of Tronsmart Ara X5, I found out that the flash was quite slower than other Windows mini PC I tested, and the USB 3.0 port would not recognize my 1TB Seagate USB 3.0 hard drive. The company has now introduced an upgraded model simply called Tronsmart Ara X5 Plus with a faster Samsung eMMC 5.0 flash, faster USB 3.0 read and write speeds (and hopefully better compatibility), 802.11ac WiFi support by replacing Ampak AP6330 module by Intel Wireless-AC 3160 and adding an external antenna, as well as fixed some micro SD card compatibility issues, and an updated UEFI binary that should reduce blue screen of death appearances in Windows. 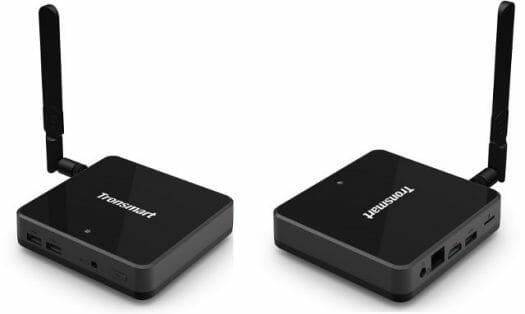 The main specifications have not really changed however:

As we’ve seen in Ara X5 teardown, the board had been designed with a baseboard and a CPU module, so they may have kept the same CPU module (only replacing Sandisk by Samsung eMMC), and updated the baseboard. 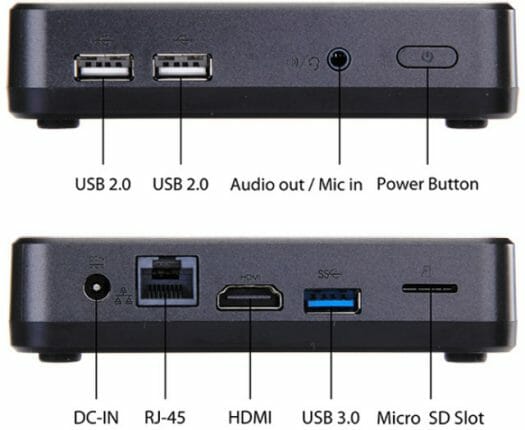 The mini PC still comes pre-loaded with Windows 10 Home (activated), and ships with the power adapter, an HDMI cable, and a user’s manual.

The company appears to have deprecated Tronsmart Ara X5, as it’s not for sale anymore on GeekBuying, with the new model selling for $139.99 including shipping.

what’s up with 10/100M Ethernet upgrade, why are they always ignored in many devices?

@shar
I don’t care so much about the Ethernet, rather why did they kept it at 2GB? Even the Pipo X6S has 4GB now.

2. I hope that the passive cooling solution that Tronsmart uses is good enough. I heard that the one in the previous model was not good enough…

3. It’s good that they improved the model! Added the external antenna + better WiFi chip, and changed the eMMC.

@ToniCipriani
Gbit Ethernet is quite important to me as well as the RAM. But when i see devices with just 10/100 Ethernet, i ignore them…

Those brand who use 4GB in z8300 is just marketing skills.

cnx-soft, could you please tell us whether the new model’s passive cooling element seems better than the one in the original model? (only by its appearance – of course you haven’t tested the new model).

here are the pictures of the two:

This has been discussed a bit. For some reason Intel claim 2GB, but manufacturers are building 4GB devices : http://liliputing.com/2015/11/intels-cheapest-atom-x5-chip-supports-4gb-of-ram-after-all.html

Yes, i read this before. I have heard in z8300 , even use 4gb ram, the performance won’t change double, or, you can not see improvement. but yes, the system read 4GB, but if performance is not changed, why we need to pay and get 4G?

here is the official information about z8300 in intel site.

No hdmi 2.0 so no real [email protected] output. This is another sh*t from piracy company Tronsmart

@Techy
Non of Intel’s chips, at any level (not even Core i7) supports Hdmi 2.0.
(Hopefully) Only the next gen chip – Kaby Lake, with Gen10 GPU, would enable support for this.
And for low-power chips (Atoms), it would probably happen only within two generations from now (the current Cherry-Trail Atoms have Gen8 GPU).
So it’s not Tronsmart’s fault.

I’m confused. So are you saying systems actually list 4GB in the OS, but the processor won’t address it? I would imagine if it’s not addressable even the OS wouldn’t be able to detect it.

Even HP has one that is equipped with 4GB. If it’s not usable why would they actually make separate 2GB and 4GB models?

@Ron
That’s the weird part. Single Channel is also listed as a spec on the ARK page. Unless it’s like the BIOS modification of the old days plus deactivated silicon in the Z8300, I can’t imagine how it could be done, because the memory controller would be part of the SoC.

@Rober
Which part broke? No power or something else?

@Jean-Luc Aufranc (CNXSoft)
box died…the power LED only blinks
It randomly reset itself while I was using it, and then when it powered up again the power LED just blinks

@Rober
So you can’t even boot from USB?
Try to see if you can make the warranty work. You’d probably have to pay for return shipping however.

Would’ve considered this if it had Ethernet.