If you’ve found yourself needing to quickly demo a system that does not look like a mess of wire to a customer, or your project is requires low production volumes, making the cost of designing your own and mass-producing the hardware prohibitive, Tibbo Project System might be worth looking into. It features an almost bare board powered by Texas Instruments Sitara processor, and a large area for Tibbit blocks to add features as needed, as well as an enclosure. 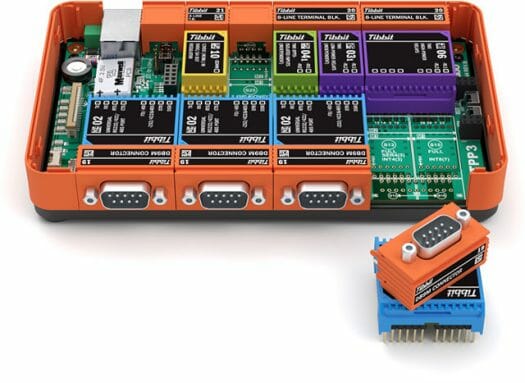 “Size 3” refers to the different size of Tippo Project System, as they also have older smaller systems based on Size 1 & 2 that do not run Linux. That’s what the bare board looks like.

Now to have a complete project as shown in the first picture, you need to get Size 3 Tibbo Project Box (TPB3) and purchase a few Tibbit blocks and connectors. Tibbit blocks have all their own number, and you can choose the ones you need among about 50 modules that include I/O terminals, serial ports, relays, isolated inputs, power supply blocks, DAC and ADC blocks, sensors and so on. For example, in the picture below I have Tibbit #19 (DB9M connector), #20 (9x terminal blocks), and #22 (Non-isolated PoE).

There are four options on the software side:

The company has also designed an Online Configurator to let customers design and order their own custom system.

LTPP3 board starts at $130, Size 3 Tibbo Project Box (TPB3) at $44, and Tibbit blocks and connectors go for between $2 to $44 (GPRS modem) each. The new system is scheduled to start shipping in May. More details can be found on Tibbo Technology website.

seems like there is no mention of which am335x is featured on mainboard. having the choice would be nice but not the point of this project I think…

Pls give me up dates about the above