Brixo, an Israeli start-up, has designed LEGO compatible blocks – also called Brixo – that conduct electricity, embed sensors, Bluetooth connectivity LED lights, or even motors. You simply use them as any LEGO blocks, but you can control them using light, sound, or your smartphone.

There are three type of blocks 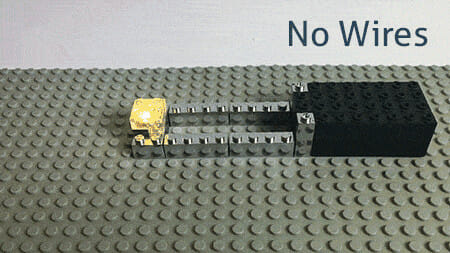 They also have a smart battery block with Bluetooth LE designed for a 9V rectangular battery. Now get some of your existing LEGO accessories, and start having fun. The demo below shows the battery block on the right, some connector blocks, and various triggers and action blocks. You don’t even need any smartphone to get started, since the sensors can be used to control the circuit, and/or your can easily insert or remove a connector block to close/open the circuit.

The project has 9 days to go on Kickstarter, and they have already raised over $500,000 well above their funding target. Various kits are available starting with the Starter Kit for $35 up to the Classroom Special kit for 40 students and going for $1280. Shipping adds $15 to $65 depending on the selected reward, and delivery is scheduled on October 2016. More details can also be found on getbrixo.com.