Octavo Systems has created a BeagleBone Black reference design that’s exactly like the original board, except for one detail: It’s based on the company’s OSD3358 system-in-package (SiP) that combine Texas Instruments AM3358 Cortex A8 processor with up to 1GB RAM, TI LDO and PMIC, and over 140 passive components into a single 400-ball BGA package. The only three other main components on the reference design are the eMMC flash, Ethernet transceiver and HDMI framer. 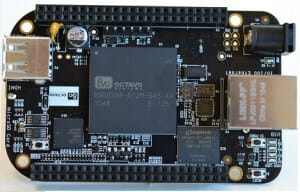 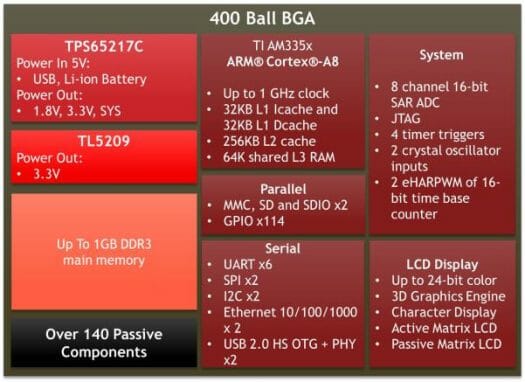 Some of the advantages of a SiP package over using multiple chips include faster design time thanks to decreased layout complexity, increased reliability through reduced number of components, power savings due to shorter signal trace lengths and reduced parasitics, and simplification of supply chain since less components need to be sourced.

Another example of board with OSD3358 is PocketBone, a mint box size Beaglebone features the SiP, two USB ports, the power circuitry, and some LEDs & test points.

OSD3358-512M-BAS with 512 MB RAM and commercial temperature range is available now for $30 per unit for 1K order. Other version are coming soon. The datasheet, BeagleBone Black reference design files (OrCAD) and other documentation can be found on Octavo Systems OSD335x product page.

Very exciting to see the new crop of SoCs/SoPs with enough embedded DRAM to run Linux. Others are:

– MT7688K (8MB DRAM) – this one is already shipping in consumer products, mostly wifi repeaters, such as: