Shenzhen Xunlong Launched Orange Pi One Allwinner H3 board with Ethernet for $9.99 a couple of months ago, and the company has now started to sell Orange Pi Lite featuring a WiFi module, two full-size USB ports, an IR receiver, and an on-board microphone for $12 + shipping. 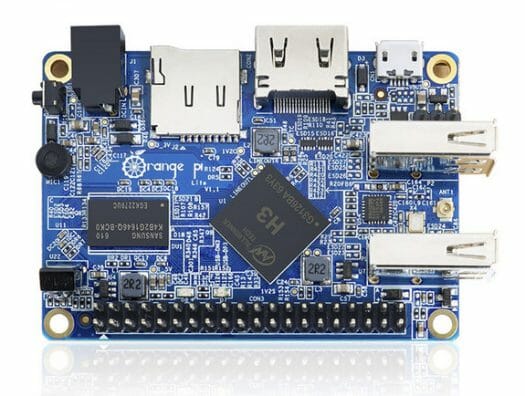 Since there’s no PCB nor chip antenna, Orange Pi Lite board will likely ship with the same external antenna used on Orange Pi Plus, and other Orange Pi boards with WiFi. 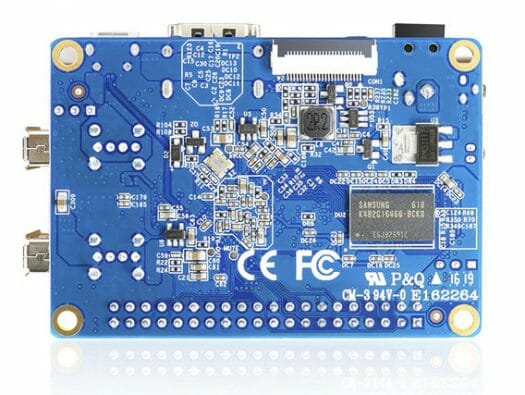 The board is said to support Android, Debian and Raspbian images available on Orange Pi Download page, but if you are going to run a Linux distribution, Armbian is currently recommend on Orange Pi boards, at least the ones based on Allwinner H3 processor. I wrote an Orange Pi One Board Quick Start Guide with Armbian in March, and also tested the image which worked reasonably well considering that’s a $10 board.

The company is also selling Orange Pi Lite kits with camera, power cable, and/or extra USB WiFi dongle (why?) for $13.50 to $17.10. Shipping is around $3.5 to the US for all four options currently available.

Armbian still does not run a mainline kernel, the ethernet driver is still unstable last time I heard.

@Deets
The small shiny rectangle between the two USB ports. I don’t know which model. The pictures are not clear, and I don’t think they’ve released the schematics or/and BoM.

@Deets
I do not see a chip antenna, and the connector looks more like an UFL than SMA.

Why would you think that shiny rectangle that has no visible traces to u.FL connector, looks exactly like a quartz oscillator _and_ is marked “X4” on silkscreen would be an antenna?

@Frederir
I’ve corrected that SMA/u.FL mistake.
So there’s no on-board antenna, and they don’t include an external antenna with the board? How is that supposed to work?

@zoobab Armbian does support H3 Ethernet with mainline kernel but we don’t provide OS images yet since we want THS stuff (SoC protection through throttling) also working since heavy workloads could damage H3 and some of our H3 users seem to lack reading skills at all (so warnings are useless) BTW: OPi Lite has no Ethernet, should work flawlessly with Armbian’s OPi One image but I’ve not the slightest idea about WiFi since according to Xunlong they now use a different WiFi chip than before (but obviously ship with the cheap external Antenna like they currently do with OPi Plus,… Read more »

Any word on the Orange PI zero release date ?

@tkaiser
So I guess that means Orange Pi Lite WiFi might not be supported on Armbian yet. So no properly working image for the board at all for the first few weeks maybe…

@Benjamin
Orange PI One is not good enough?

I’m just interested in what they can pull of for 5.90$ (thats the price they mention on the forums).

Personally, i’m far more interested in cheap boards supporting usb3/sata and gigabit ethernet. But none of those.

@Jean-Luc Aufranc (CNXSoft) No idea since I neither care nor know if it’s a) really RTL8189FTV as someone said in the forums and b) whether this chip still works with the somewhat crappy 8189 drivers we have to use now. I’ve seen some users and Armbian devs spending huge amounts of efforts/time on wireless drivers for Orange Pis lately but since slow SDIO WiFi implementations only able to use the overcrowded 2.4GHz band are close to useless for me didn’t take notice how far we’re now. But I would suspect Igor integrates a newer variant of the 8189es driver into… Read more »

@Benjamin OPi Zero for 5.90$ comes with zero connectivity, zero usability, nearly zero availability but twice the shipping costs to ensure that only the “Buy cheap, buy twice!” target audience gets really excited 😉 Since Xunlong switches away from Allwinner/H3 (OPi PC 2 with H64, another yet announced new board with USB3 and SATA) maybe OPi Zero will also use a completely different SoC? Currently these zero boards are more of a PR stunt than a useable product. But let’s see. My first thought when hearing about OPi Zero was: Maybe something useful as cluster node? No connectors at all,… Read more »

Well, if its small and power efficient, that it sorta makes sense for certain projects.

@Benjamin
Using H3 I wouldn’t build any cluster but since Xunlong prepares at least one board with H64 (A64’s twin) an ‘Orange Pi Zero 2’ based on this would be already interesting (Linpack performance twice as much when using ARMv8 instructions!).

Unfortunately H64 AFAIK contains no Ethernet PHY and needs a PMIC which might increase the costs by a whopping 2.40$ 😉

@Benjamin
high performance little boards like that are indeed hard to achieve, the chip alone could be above $10

what size is the power barrel ?

Personally I think Orange Pi should leave Pi Zero to it, the Orange Pi One is a better board for low income people and education use, I know most think that’s not the market the Zero is aimed at or that exists. If Orange Pi want to stir up the market then I would suggest a new market. A standard H3 Android TV box but with built in GPIO added and option to boot from SDcard. 2GB ram. GPIO to be accessible and useable from within Android,. target market normal non technical people, makers and education. A lot of Orange… Read more »

Give yourself a gold star if you spot what odd!

@Theguyuk
It’s also a way to add wifi to the board, strange nobody mentioned this solution before…

@tkaiser Hello and thank you for the work the Armbian team put in supporting so many manufacturers boards. I noticed the WiFi is Realtek going off the released photo and admin on Orange Pi have confirmed it is 8189ftv If that helps. As to which or what Orange Pi board is not so simple because tax, postage, availability and the perceptions of the buyers affect choice. You can explain to them that the OPI PC is a better choice but still beginners say ” I just want to see if I like Orange Pi first”, so buy the cheapest they… Read more »

@No sh#t I read also that 8189ftv is confirmed. But of course no additional ‘(100% software compatible)’ added so still no one outside Xunlong knows what to expect (they chose a different chip by intention so it can not be expected automagically that no software changes are needed — tbc) Regarding sales figures based on Aliexpress Orange Pi PC still sells better and for whatever reasons newbies buy this board or that paperweight doesn’t matter that much since with some limited knowledge you can avoid buying the wrong device. So many people dream of soldering the missing connectors to Orange… Read more »