CloudMedia introduced Popcorn Hour A500 Pro last summer on Kickstarter, and as the company is about the ship rewards to backers, they has now recently introduced a lower cost version, called Popcorn Hour A500, based on the same processor but overall lower specs to bring the price down to $269. The company has  sent me a review sample, so I’ll start by listing the hardware specifications, and post pictures of the device and its internals, before testing media playback capabilities later on.

The “non-PRO” version has less RAM, dropped the XLR connectors, and  uses a cheaper audio DAC:

It’s also an update compared to Popcorn Hour VTEN that features a single core Cortex A9 processor, and no internal SATA bay. The media player runs Linux with NMJ (Networked Media Jukebox) navigator user interface, and you can also control the device with Android or iOS Mobile NMJ navigator app.

The package is massive (and heavy) compared to the Android TV boxes I’m used to receive. 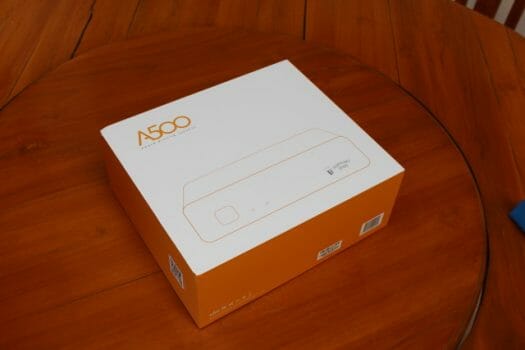 The accessories also highlights some of the feature of the device with for example a USB 3.0 slave cable to use the box as an external hardware, and the screws and key for 2.5 ” and 3.5″ SATA support.

Other items include a HDMI cable, a 12V/3.33A power supply and power cord, the remote control and two AAA batteries, a quick start guide, and a warranty card explaining the device comes with one year warranty. The yellow sticker on the top of the device confirm it is a fanless design with an aluminum case that may get rather hot during use.

The media player itself feels of very good quality with its metallic enclosure. The front panel has a window for the IR receiver and LEDs, one of the side feature the SATA bay, an SD card slot, as well as a USB 2.0 port, while the rear panel has plenty of connectors: IR extension hack, USB 3.0 salve port, Gigabit Ethernet, another USB 2.0 host port, HDMI 1.4 output, composite and component RCA connectors, stereo audio RCA connectors, optical and S/PDIF RCA connector, the DC jack and finally a power switch. 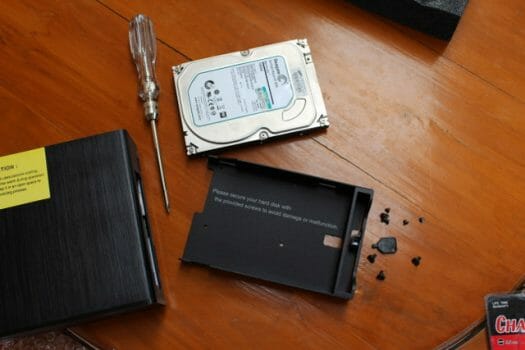 I unlocked the SATA bay with the provided key to connect a 3.5″ hard drive. The four holes on the bottom are for 2.5″ HDD and are meant to be used with the four small screws. 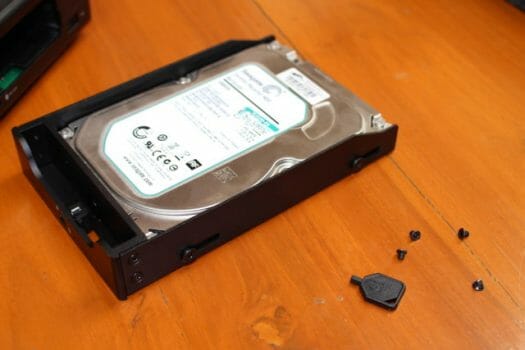 But for a 3.5″ HDD, you’ll use the larger screws and the opening on the side of the SATA slot. Then push the slot back into the case to insert the drive into the SATA connector.

Let’s open the thing. You can leave the four feet alone, and loosen the four other screws on the bottom, the two screws on the top corner of the rear panel and remove the SATA bay to open the device.

The case has been made by SilverStone, a company that appears to be popular for PC chassis. By the way, while the case is of very good quality, the key to lock / unlock the SATA is made of plastic, and was unusable when I tried to unlock of SATA bay, as its edges were damaged. I spent around 15 minutes to find alternative tools to unlock it, and retrieve my hard drive. So when the teardown was complete, and I put everything back together, I’ve not locked the SATA bay. We’ll see how it goes.

There’s no much to see on the top of the board, but I still took another picture with a different angle to show the SATA connector.

I loosen four more screws to have a look at the other side of the board.

There’s a thermal pad attached to the metal case, with some thermal past to dissipate heat from the Sigma Designs SMP8758 processor. That’s the only point I could see where heat from components is actually conducted to the metal case. Other components include SKhynix H27U4G8F2DTR NAND flash (8GB), and two SKhynix H5TQ4G63CFR DDR3 chips (1GB RAM in total), and Atheros AR8035-A Gigabit Ethernet transceiver.

Cloud Media sells Popcorn Hour A500 directly on their website for $269 plus shipping, and through resellers.

I had an A100, A110 and C200 back in the days…
And all those years, hoping for a bugfree firmware…
Maybe things has changed in the recent years, but I’ll never buy from them again.

What’s the chip between ‘Q.C. passed’ sticker and the Ethernet chip on the other PCB side? The traces to SATA data originate from there.

@tkaiser
Sorry, I’m not sure exactly which chip you mean., unless you’re talking about the Atheros chip.

@Jean-Luc Aufranc (CNXSoft)
Sorry, the chip is on the other side of the PCB (most probably an USB-to-SATA bridge). On the picture above C337-C340 terminate there.

@tkaiser
Sorry, I did not take any picture clear enough, and don’t feel like opening it over again.
Having said that, Sigma Designs chips normally come with proper SATA. Too bad their public documentation is virtually inexistent, and closed source SDK (even to people who purchased it) is a nightmare to work with.

@Jean-Luc Aufranc (CNXSoft)
That’s the block diagram for the processor used in the previous model (A-410).
http://www.cnx-software.com/wp-content/uploads/2014/01/SMP8910_SMP8911_Block_Diagram_Large.jpg

@Jean-Luc Aufranc (CNXSoft)
Hmm… the block diagram is for a MIPS SoC instead. Anyway since you’re reviewing it later ‘lshw’ should be enough to get a clue what’s used there (my usual concerns: Is it possible to access the drive with hdparm to cure ‘load cycle count’ and spindown problems and smartctl to get drive health status and be able to trigger selftests — easy with real SATA, most probably not possible with USB-to-SATA)

@tkaiser
Hmmm, Sigma Designs made the switch from MIPS to ARM in recent years, and I don’t have the block digram for ARM based Sigma Designs SoC. They still target high-end STBs, and I’ve been told their SoCs are still quite expensive.

I don’t know about these products but why so expensive? If you allow $69 dollars for a very high android TV been box, where do they spend the extra $200 dollars on this Linux box, it sure is not ram or nand rom?

@Theguyuk
The processor itself must be over $30, then there’s the largish metal case, the power supply (12V/3A), ESS audio DAC (not sure about the price for that), etc… Cloud Media is also asking for a higher margin since they support their device over time (PopCorn Hour Chameleon released in 2014 is still getting firmware updates), although as some have noticed some bugs die hard.

I has A100 and C200. They stopped supporting these without fixing existing bugs.

Now using raspberry pi 3 with mele f10 remote and kodi.net installed. Does it’s job and at least kodi is maintained! All that for much smaller price than popcorn hour.

@Theguyuk Believe it or not but good audio cost money. The DAC inside of this box could cost more than an entire NEXBOX MXQ Pro, and then maybe you understand? I have compared my Texas Instruments Hi-Fi DAC+amplifier to the now four years old Realtek integrated and can very clearly hear a difference. I tested with my newer 2 years old Dolby licensed Realtek integrated and I could actually barely hear any difference, the only issues was that I could hear it pick up noise from the computer or in general distortion. But you don’t hear that on high volumes,… Read more »

Thank you for sharing. This looks like an awesome box. I have a A-400 and I am truly happy with their long list of recent update! I see the company is picking up on the pace of their firmware support these days. I believe the PCH will continue be the best box in town 😀

@cnxsoftware let us know when you will do a review on this box. Just can’t wait!

cool player. i may just find what i need?

Thank you for the short review. I am long time Popcorn hour customer, and in general term i was very satisfied with them! I would be lying if i say that there are no time when i was a little upset for some of their past business choices, but they could never “managed” to alienate me from them. And i am sorry if some of you have not so lucky with them, but don’t let your past grunge rob you from something truly amazing like the VTEN, or the upcoming 500 series players! Guys, i can tell you this without… Read more »

A-500 Pro: after 9 month of kickstarter people have payed for nothing!

Forum: they declare to be independent by Cloud media but BAN everyone that ask for support or speaks negative about their products.