DOM’s or Disks on Module are quite popular with embedded system makers, but they’ve traditionally used slow interfaces like PATA or USB 2.0, with some more recent models using SATA or USB 3.0.

At Computex, Innodisk was showing off an entirely new entry which should hopefully become the new standards for motherboard DOM’s. By using a horizontally mounted M.2 connector (B keyed) with a screw hole on each side, Innodisk has created a compact connector for DOM’s that build on industry standards. The great news here is that the same connector can be used for USB 3.0, SATA and even PCI Express based DOM’s.

Innodisk does of course offer a full range of compatible products, starting with the M2DOM U30 featuring a USB 3.0 interface. This is the “slowest” product in the range with speeds of up to 100MB/s and available in capacities from 8-64GB.

Next up is the M2DOM S20 and S30, both featuring SATA interface. The S20 is the more basic model of the two with speeds of up to 220MB/s. It’s also the smallest in terms of height, but still managed to squeeze in between 8-64GB of storage space. The S30 not only increases the speed to up to 530MB/s (similar to a typical SSD), but also increase the capacity to 16-256GB. 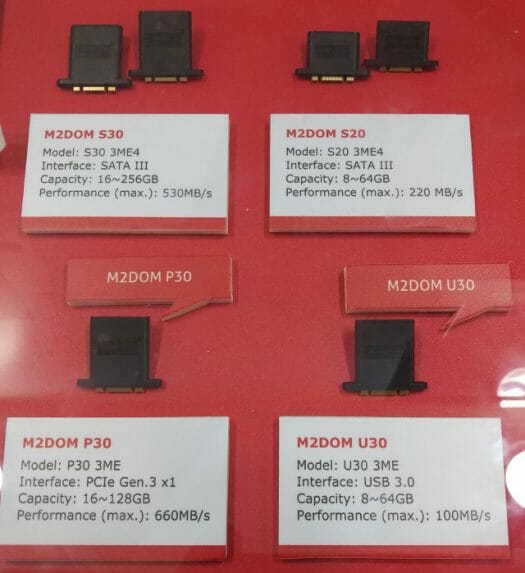 The neat thing with all of these modules is that they come in a sealed unit to protect the PCB from dust and other potential nasties and once screwed in place, they’re not easily going to fall out. There was no word on pricing and the products are expected to be available later this year. Hopefully this will be a standard that will be adopted by embedded board makers, as it’s a far superior solution to any of the current DOM options available today.

So if other companies want to make similar DOMs, they will have to use another name. “M.2 B Key DOM” should probably be OK…

@Jean-Luc Aufranc (CNXSoft)
Or just “M.2 Disk on Module” 🙂
But seriously, this is of limited use (compared to older DOM standards)… the difference to a regular M.2 slot is just that this one is vertical, making it potentially easier to swap.

Yes, it’s of limited use today, but if this becomes a defacto standard, it’ll make everyone’s life a lot easier and it’ll be a unified slot that support multiple storage interfaces.

TLS : Yes, it’s of limited use today, but if this becomes a defacto standard, it’ll make everyone’s life a lot easier and it’ll be a unified slot that support multiple storage interfaces. Only thing is I hope there is a breakout male connector to allow power / connectivity to current devices available for it. I don’t mind seeing the current SATA connectors on system boards, etc. It may or may not be complete enough with these only on the connector. Will have to think about that. I’d almost hope for a way to bring out video on the connector… Read more »

@jim stephens
You do know that this is simply a horizontal PCIe connector, right? Technically you could connect anything to it, as long as that anything has a PCIe interface. They’re using a B-key M.2 connector, so technically any old M.2 SSD should fit, it’s just that the M2DOM’s can be screwed firmly to the board and they have a housing to protect them from dust, humidity etc.