Linaro Connect Bangkok (BKK16) will take place on March  7 – 11, 2016, and the schedule is now available for the 5-day event with keynotes and sessions. Whether you’re going to attend or not, it’s always interesting to check the schedule to find out what’s going on in terms of ARM Linux development. 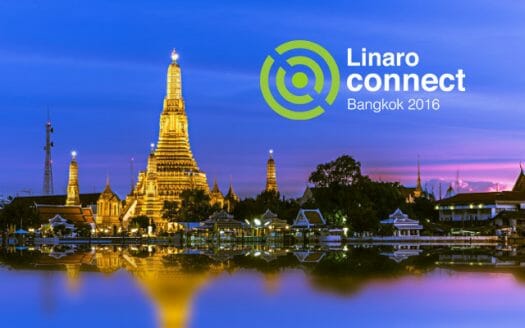 The five days will focus on work by different Linaro groups, but really sessions are mixed for any given day, and I’ve created a virtual schedule for each day with available information, as Linaro has become a little more closed to the outside than when it was launched a few years ago.

The Reference Software Platform lead project was introduced in Linaro Connect San Francisco 2015, and since then it evolved and matured with the completion of the first tree big milestones (the 15.10, 15.12 and 16.03 releases). This session will revisit the work done as part of the previous releases, covering the projects that were incorporated through the process and our vision for the future milestones.

The Budget Fair Queue (BFQ) I/O scheduler in the Linux block layer is a new heuristic approach to improving user-perceived latencies in block accessible media such as hard disks, SSD and (e)MMC and SD cards. Linaro is investing and helping in pushing this development ahead. The session describes what the BFQ patch set does and how.

Smart connected devices such as mobile phones, tablets and Digital TVs are required to handle data with strong security and confidentiality requirements. A “Trusted Execution Environment” (TEE) provides an environment for processing data securely, protected from normal platform applications. This talk is intended as an introduction to Trusted Execution, and the open-source Trusted Execution Environment OP-TEE in particular. It introduces the GlobalPlatform TEE Specifications, explains how Trusted Execution is implemented by ARM TrustZone and OP-TEE, and outlines how trusted boot software manages the secure boot of an ARM platform. Finally, it gives some pointers on how to get started with OP-TEE.

This presentation provides a current view of the Security work performed in LHG. The focus is on hardware protected DRM integrated with OP TEE, creation of a Secure Data Path coupled with the Open Content Decryption Module, and the lessons learned from integrating third party libraries into trusted applications.

This BOF session will analyze architectural challenges migrating Chromium from the desktop to embedded devices. The impacts of different GPU libraries with their respective limitations will be discussed. We welcome audience participation in an open discussion on the V4L2 adaptation in Chromium.

The arm64 port is now in pretty good shape with most things ported and built in distros. However we know that there is plenty of software that is not optimised and some may not actually work at all. Please come along and moan about anything you have found which doesn’t work as well on arm64 as it does on x86. We (Linaro, ARM and Debian) want your feedback on where to direct effort next.

Generating a specific power model for the platform is a pre-requirement for deploying EAS (Energy Aware Scheduler) and IPA (Intelligent Power Allocation). This makes understanding power models and how to generate parameters for them a useful skill. In this session we demonstrate how to use workload automation to gather power data from a board. We will then describe how to derive rough values for the EAS and IPA power models using nothing but this easily observable data. We will not rely on any information provided by OEM or SoC vendor.

This session is an advanced course on Linux kernel upstreaming fundamentals. The course covers how the arm-soc kernel tree is maintained and why that is important to ARM Linux kernel developers. The focus of the course is the explanation of the detailed mechanics of creating and posting patch series to upstream mailing lists for several common cases. Annotated session content is made up of previously upstreamed ARM support captured from emails to the kernel mailing lists. The target audience is both software engineers and engineering managers preparing to upstream software into the kernel. The topic requires a solid background in software configuration management terminology and the git SCM tool as well as a good technical understanding of the Linux kernel itself.

This presentation provides the background for the requirements of the latest 96Boards TV Platform specification. It describes the range of set-top features that can be delivered and focuses on the key software and firmware support.

The ARMv8 Server Lab has been up and running for more than a year since the inception in the late Fall of 2014 and helped continuously those who need server-grade hardware to verify their software, from the kernel to user applications. In this BoF at BKK16, the Server Lab users get together for the first time to review what we have accomplished so far and share knowledge obtained from our experiences in the Lab. Constructive feedback from the users should shape the direction of the Lab in the coming months of 2016. The BoF structure is as follows: possibly a few short talks from the users, 10-15 minutes each, will be given after the introductory address of the status of the Lab from the managers, followed by a discussion between the attendees.

ILP32 is a programming model that may be useful on AArch64 systems for performance and also for legacy code with 32-bit data size assumptions. We combined ILP32 support from upstream projects with the LEAP distribution to enable experimentation with this model. This talk discusses the relative benchmark performance of the LP64 and ILP32 programming models under AArch64.

ATOS is an Auto Tuning Optimization System that is able to find automatically the best performance/size tradeoff from a build system and a training application. The input of ATOS tools are a build command and a run command. From the build command, ATOS will infer an internal build configuration that it will run with different sets of compiler options. These build configurations are executed with the run command from which code size and performance will be extracted.

From the set of build configurations that ATOS explores, one can extract the preferred trade-off between code size and performance. The extracted build configuration can be archived and replayed later in order to generate the optimized executable without any modification into the initial build system.

The nice property of ATOS is that NO modification of the sources or the makefiles are needed. ATOS can work on any large/deep project, as soon as the compiler used is gcc or LLVM under Linux.

Previous introductory tutorials on LAVA have focused on virtual platforms. This is an end-to-end tutorial as a basis to evaluate LAVA with one or more embedded targets using U-Boot. It integrates both a physical bootloader device with a stand-alone installation of LAVA, along with a simple PDU for target power control which is based on off-the-shelf Arduino components and fully integrated with pdudaemon. It covers device requirements, device configuration for 32- and 64-bit platforms, use of lavatool, tftp, pduclient and logging via the LAVA web interface and /var.

Session discussion on various opensource applications on ODP and their implementations. Applications to be discussed include NGiNX, TRex, OFP

The complexity of the tools and working environments is very high in IT area, especially in software engineering field. Thanks to Linux’s freedom of choice and flexibility it gets even higher. Due to the amount of time needed for learning all those bits of technology, it is not practically possible to set up an ideal workspace without talking to others and learning the results of their research. So, let’s come together and discuss hardware/software setups for our workspaces and learn from each other.

An overview of the work being done to support the mezzanine hardware ecosystem. Will cover the tools available, the boards that have already been created, and materials provided to support mezzanine board designers.

Materials require having registered to Linaro Connect BKK16, but several PDF slides have been uploaded to Linaro slideshare, you can get a peak if one subject interests you.

Anybody can attend, but you’ll need to purchase tickets ranging from 500 GBP ($726) for one day to 1,600 GBP ($2323) for the full week, unless you are a student,work in academia, or open source projects connected with ARM development, in which case you may get a free ticket.