Last month I received Popcorn Hour A500 high-end media player powered by Sigma Designs SMP8758 dual core Cortex A9 processor, and in the firtst part of the review I posted the specifications, and pictures of the devices and its internals. Today, I’ll write a short review of the device, as it’s basically an update of Popcorn Hour VTEN which I reviewed last year with a faster processor, more memory, and an internal SATA bay for 2.5″ and 3.5″ drives.

The user interface is basically the same as on VTEN with two home screens to select: Media or Music.

The performance is a little better, but if you want to find out more about the user interface, I propose you watch the video I shot for Popcorn Hour VTEN

During the first boot, Music Home was selected, and I soon got asked whether I wanted to upgrade the firmware, and OTA firmware update worked just fine. 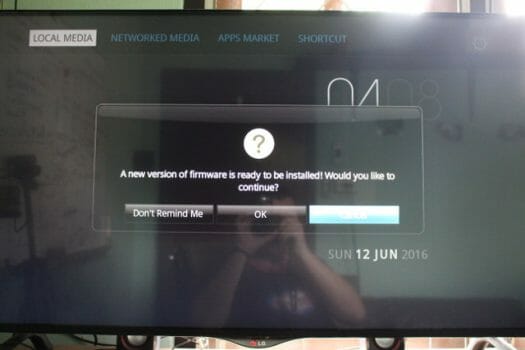 One difference with VTEN is that the number of apps to install has decreased from 59 to 52 with YouTube, Russia Today still there, and working as expected.

The remote control provided with Android TV boxes is normally pretty useless, with since Popcorn Hour A500 is a pure media player the remote control is the only input option you have, and it’s actually pretty good for the task as you have quick access to various features such as audio track, video zoom, play/pause and other trick modes, subtitles, and so on.

Another thing that pleasantly surprised me is that the remote control keys are backlit, so it’s more convenient to use in the dark. I think it’s the very first time I get a backlit remote control.

I tried both a 1TB 3.5″ HDD with an EXT-4 partition (and some bad sectors) and a 128GB 2.5″ SSD with two partitions (NTFS and EXT-4) in the SATA bay. The hard drive was not detected, but the EXT-4 of the SSD could be mounted and and I could play some video using “Local Media” option. Others had no problems with larger hard drives. 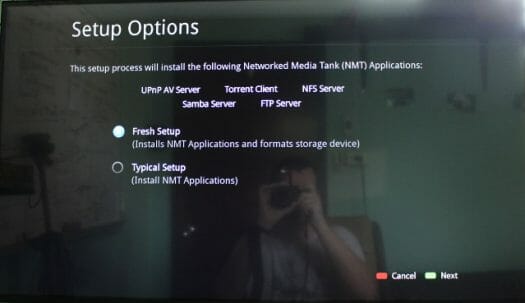 Popcorn Hour A500 can also be used as a NAS running UPnP AV, NFS, Samba, and FTP servers, and it can download torrents using a web based torrent interface using Transmission BT.

This brings me to the last part of this section before I carry on with video and audio testing. Cloud Media offers email support to customers, and well as a detailed user guide for Popcorn Hour A500, and their other devices. You can also check Network Media Tank forums to get some help.  I can also see the company has been working on firmware updates for their devices for well over a year, so you get a level of support that’s higher than with most other manufacturers, which should be reassuring. However, I’ve also read a few people write they would never buy a Cloud Media device again, as they could not fix the bug(s) that affected them on older devices.

The first video samples are the easy ones from samplemedia.linaro.org, plus H.265 videos by Elecard:

Exactly the same results as in VTEN. Then I switched to videos with various bitrates:

Most videos played fine over Ethernet, even the 120 Mbps one. I could also clearly notice that the video quality is superior to most Android TV boxes as the device appears to be able to clear some “white noise” on some videos, notably in the bottom right corner of the “birds” video, possibly with some clever post-processing performed with the SoC’s VXP video engine.

I’ve added Dolby Atmos and DTS:X since last year, but apart from that the results are exactly the same as with VTEN which I tested a year ago. The fact that they did not fix TrueHD downmixing is unimpressive.

Sintel-Bluray.iso and amat.iso (unencrypted Bluray ISOs) could play fine, and MPEG2 videos too. However, Popcorm Hour A500 does not support Hi10p (10-bit H.264) video, as all I got what a black screen and audio for the two anime videos I tried.

That’s not too bad, but the results are fairly similar to other devices that sell for a fifth of the price.

Finally I tried some 3D videos. My TV does not support 3D, but my A/V receiver is capable of detecting 3D MVC videos and shows a 3D icon:

Popcorn Hour A500 capabilities are quite similar to Popcorn Hour VTEN, but it’s a little faster, features a SATA bay, and ships with a backlit infrared remote control. The video “smoothness” is comparable to what I get in Android TV boxes, but the video “quality” appears to be better in some videos, probably due to VXP engine and some post-processing. Audio quality should be better too, but I could not hear noticeable improvement. I don’t quite have “musical” ears though…  The main downsides I experienced were that the player did not recognize my (old) HDD drive (SSD OK), and it also rebooted twice as I tested videos. It’s also possible to setup PCH-A500 as a NAS server with UPnP AV, torrent client, NFS, SAMBA and NFS services. Another positive point is that Cloud Media provides support by email, decent documentation, and access to NMT (Networked Media Tank) forums as mentioned in the first section of this review.

Cloud Media sells Popcorn Hour A500 directly on their website for $269 plus shipping, and through resellers.

is the remote IR or RF? Do you have a type nr. for the remote?

Popcorn Hour A500 does not support Kodi / XBMC which is I think reason enough not to buy it.

The age of NMTs based on customized Linux versions is gone, in my opinion. I don’t know if sigma SOCs can handle android well, given the small amount of RAM all or most designs include, but they should really step it up. Android is much more flexible and its wide user base makes it much more attractive. Not to mention the lower pricing.

@Oren
Maybe that one could be an option for people who want both a NAS and a 4K media player, since PCH A500 can do both.

@roel
Infrared remote control. I can’t see any model number. Inside there’s a sticker with HOF16B720GPD6, but it does not look up to anything.

Thank you for taking the time reviewing this player, but sadly your review it’s just to “simple” or i like to call it, a little lazy! Your reviewers now just doing this “job” …… ok remote have light…… let’s run through some video…. ok, ok,…… audio….. ok, ok…… then your conclusion. 🙁 In the process, who really want to know a little more about this player, this review was not helping them! Actually, this review is only helping the Kodi lover to feel better! I really hope that Cloudmedia didn’t awarded the player fof you guys, for your “honest review”?… Read more »

@Jean-Luc Aufranc (CNXSoft)
Ok, so if you have 4K TV and 4K content then you can consider a500. Otherwise a big waste of money.

@Harley I have messed with Kodi again and have come to the same conclusion. If you want to watch your files rather than playing around for hours with Kodi don’t us eit. It’s becoming bloatware and has abandoned Android development. Cheap Android boxes and Kodi wont last as Kodi seems no longer interested on Android. Probably getting too much attention for those illegal streaming services due to the numbers. The only way to watch Kodi in anything approaching the same Picture Quality as the more expensive media player using the Sigma chip is to use a high powered PC and… Read more »

Aaa :
@Jean-Luc Aufranc (CNXSoft)
Ok, so if you have 4K TV and 4K content then you can consider a500. Otherwise a big waste of money.

Simply zero logic to this statement.

I dont have a 4K TV and have a A500. The picture quality is far better than any other media playing device and the VXP processing comes into its own on standard SD material.

H265, believe it or not it comes in non 4K, is supported and loks great given small file size.

Guys, I have both Raspberry Pi 3 with Kodi and an older Popcorn Hour a210. Most of my movies are full Blu Ray Remux or ISOs. I really value video quality so I play all my movies still on the popcorn hour. The Pi is nice for TV shows in low quality but the motion, colour, smoothness if far better on my old PCH A210. I’m in the market for a new player because I would like H.265 support so again I’m looking at the Sigma design options. The movie presentation is the most important thing, not how slick the… Read more »