Oscilloscopes used to be rather bulky equipment, but recent full featured oscilloscopes have come down in size, and even become portable and battery operated with products such as DSO Quad. But since many of us already own Android tablets or iPads, Aeroscope wireless oscilloscope probe is quite a neat solution as it transmits images of the waveform over Bluetooth 4.1 to your tablet. 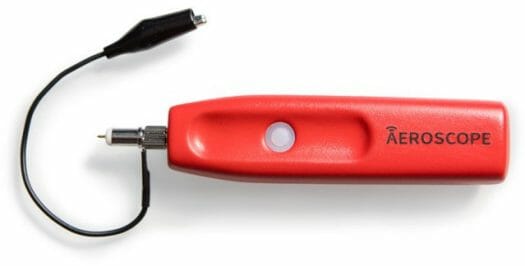 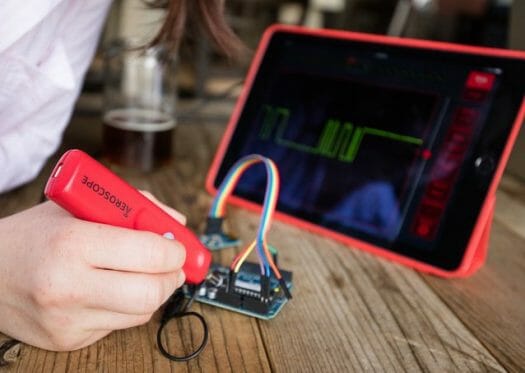 The development of the iOS app is complete, with Android support coming soon. The app and protocol will both be open source, so you’ll be able to write your own and augment the current one if it does not meet your requirements. You won’t be able to use older tablets however, as Aeroscope requires Bluetooth 4.1 which means it will work on iOS 9 devices such  as iPhone 4S and later, iPad 3 and later, iPod touch 5th generation and later, iPad mini, and iPad pro, as well as “selected Android tablets”. The app support touch gestures, trigger control, and can measure amplitude (Vpp, Vrms), frequency, and average voltage. As mentioned in the introduction, it transmit video frames, not the actual data, which may be an issue in case you want to analyze / process the data afterwards.

Aeroscope also allows use case that were not possible or complicated to achieve before such as taking measurements on a moving robot, and it’s also extremely portable, so it appears to be ideal to take measurements on the field.

Currently only one Aeroscope can be used at a time, making it single channel oscilloscope, but work (software development) to support a second channel is in progress with two Aeroscopes connected via a special USB cable. It will be enabled by a OTA firmware upgrade once it is ready.

The developers has launched a crowdfunding campaign on Crowdsupply, where they aim to raise $100,000 to go ahead with mass production. The early bird pledge is $259 for the first 25 backers, after which it will be $279, and the retail price should go up to $359. Shipping is free to the US, and $30 to the rest of the world with delivery is scheduled for mid December 2016.

Nice concept but a little expensive.
I like the hand free without cable but at this price i prefer a portable osc + multimetter combo in range of 150-200$
And bluetouth…amazing stuff on linux. Wifi too easy?
Energy saver? Hum cpu for digital processing win in power consumption over wifi or bt.

@boobypi
WiFi is terrible to use on the go, need to setup an AP, make sure both sides are on same subnet, encryption keys…

Russians pirated it some 5 years ago, for $100: http://oscill.ru/eng/oscilloscopes/usb/btusboscill.html