Three days ago, a T-chip representative informed me privately that Firefly development board (Rockchip RK3288) would not be available on foreign websites, and that it was unclear when the board would be selling in China. So either I’ve been lied to, or there’s poor internal communication within the company, as they’ve now listed Firefly-RK3288 board on Taobao for 800 CNY (~$130), and it’s also available on GeekBuying for $159 including shipping, possibly by somebody unrelated to T-chip, especially there are only 3 units for sale. 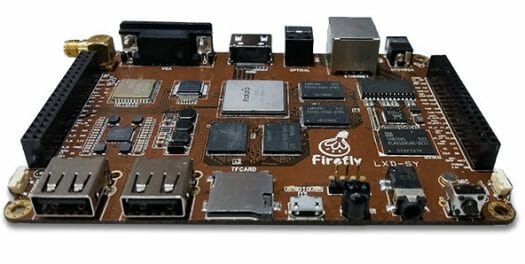 Let’s go the specifications that have slightly changed since the original announcement:

The board ships with a USB cable and a Wi-Fi antenna. An acrylic enclosure and a 5V/2A power adapter are available as option. The company has now updated their Wiki in English with a quick start guide, hardwre document and instructions to build Android and Linux from source. You can also download Android 4.4 and Ubuntu (Lubuntu) 14.04 Desktop images, or a dual boot Android/Ubuntu image.

Since the board is $130 on Taobao, and $189 on Ebay, you may be able to save a few bucks by buying via Taobao from third party websites such as taobaoring or engtaobao. According to a post by Charbax, it might also be possible to get it shipped for $159, but contacting the company by email, but of course in that case, you don’t have third party protection. Such board is mostly interesting since you’re hopefully getting an up-to-date SDK for the board, but if you are simply looking for devices with these features, something like Tronsmart Orion R28 Meta would be cheaper.

It’s good, includes MIPI interface and there are some information files in their website.

You can now buy RK3288-Firefly on Aliexpress for about $160 including shipping – http://www.aliexpress.com/item/Firefly-RK3288-Quad-core-Cortex-A17-processors-Development-board/32224160718.html

Hi
For a RK3128 developing project please contact me.

I would like to purchase RK3288 EVM.
Please let me know where I can place an order.
Also need to know if SDK will be provided as well.
Please confirm if the codec library of arm-linux-gnueabi-4.7 is compatible with your compiler version.